Dogs in our life 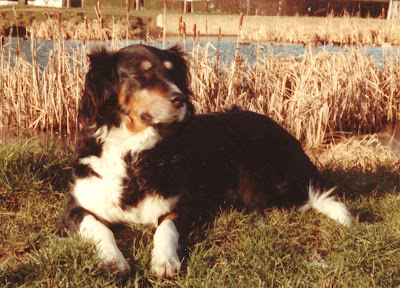 Wags was the first dog we had. We had her as a puppy when Sue was about 6 or 7. She was half pedigree Springer Spaniel, but her mother Got Out at the wrong time and met the local Border Collie. Wags was never quite sure whether to round us up or concentrate on retrieving us! 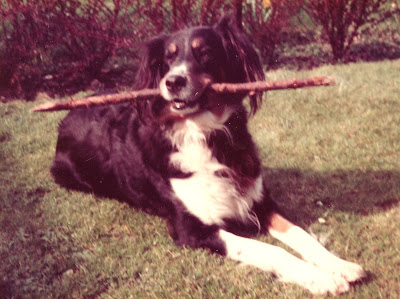 She was the most wonderful dog. Very playful, very gentle, long-suffering but an excellent guard dog. She knew when a stranger was coming to the front or back door, and would bark loudly. Just one or two barks, until we had sorted the caller out. Our driveway had no gate, but she would sit on the concrete of the driveway, with her paws just touching the tarmac of the path, and never go out! 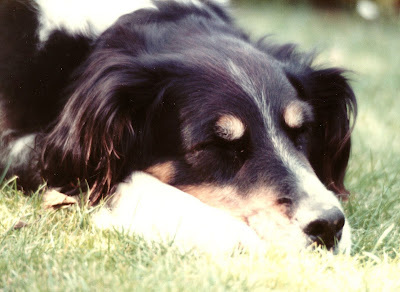 She was a very handsome dog, and of course, had a lot of admirers! But she considered herself MY dog, and I felt quite happy taking her for a walk in our local woods even when it was only barely light in the mornings. Had anyone approached me she at once came near, and I am sure would have gone sraight for the jugular had I been attacked! We had her for 13 wonderful years, and I cried for a week when we had to have her put to sleep because of a nasty malignent tumour she had n her mouth. 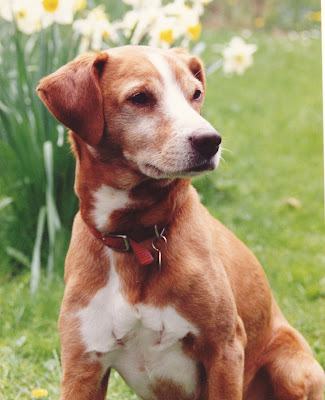 Our next dog was a rescue dog, called Ben. We were never sure what sort he was, but whatever it was, he loved digging! Many times I had to drag him out from a hole he was investigating and digging into. I had visions of him disappearing into a badgers set, or rabbit hole and being lost for ever! He too was a very good looking dog, neat and tidy, and liked nothing better than curling up next to me. 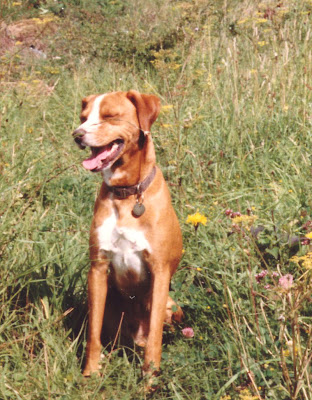 Ben was a very energetic dog, and on walks would run back and forth, so that he went at least 3 times as far as we did! He would endlessly run after balls thrown for him, but was not the best dog at bringing them back! When we moved from Buckinghamshire up to the North West near Manchester, he came with us, and loved the Park at the back of the garden

We had Ben for about 16 years - he lived for a remarkably long time, and only left us when his quality of life was not what he would have wanted. 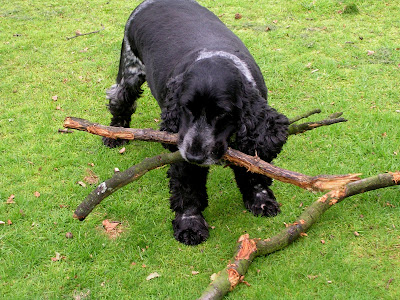 Our current dog is Max. In a sense he was a 'rescue' dog, as he belonged to my ex son-in-law. He had had Max, plus another dog, for nearly 5 years, so Max had grown up with my grandsons. When son-in-law moved to the USA the dogs had to be rehomed. So who better to take one than Grandparents! We had vowed not to have another dog, as we were getting older, and really wanted to be able to travel a bit before it was too late, but we got Max instead. He loves sticks, and happily collects as many as he can carry! 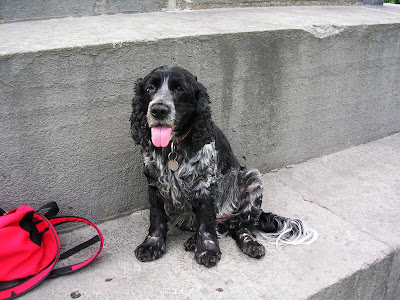 Max came with us on holiday to Anglesey, where he was in his element, as the owner of our rented holiday cottage had 13 Cocker Spaniels, like Max! This picture is of a very hot and tired Max waiting at the foot of a monument on Anglesey. A drop of water would not have come amiss! (But he did get some soon after!) 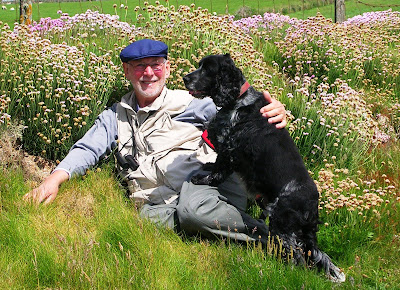 Max loves walks, but likes to keep to the edges of wherever we are, nose down, sniffing his way along. He would have made a splendid sniffer dog for drugs or whatever! Mr. G here is having a rest, but Max is ready to go further!

I know not all of you will be dog lovers, but I hope you will forgive me indulging myself today. It is a cold, grey and wet day, there isn't mch else happening, so I blogged with dogs!

We have had one dog - Charlie, who we lost last May. Liz now volunteers at Battersea Dogs Home, and keeps nagging me to get another dog, but right now I am not ready for one.
Your pets look wonderful companions though x

I love your dog tales Gilly - and it looks like you have had three gems. Bye for now, Lesley

I loved your dog post! All three are handsome and fine specimens. We had a dog: Buster -- a beautiful cocker spaniel -- buff colored; a sweeter dog has not existed. He was about 10 or 11 when we had to put him down. Our hearts broke.

It is interesting to see your dogs.
I've never had a dog, though when I was younger, I had a very large imaginary dog, named Sam. I think he was a sheepdog.

Yes indeed, your companions were all fine handsome fellows. I can't imagine not having animals around. We had a shepard collie mix named Sheba who was a joy and delight. She also collected sticks or leaves to show us when we drove into the yard. Sometimes she would even let us have one as a gift.
I enjoyed meeting your sweet pals.

I was afraid of dogs as a child, but when I was in my early 20's a friend convinced me to get a puppy, and that puppy stayed with me for 16 years - amazing longevity, just like your Ben. We got our wonderful malamute a few years after he died, and now, many years later, we have our dear funny scamp, Jack.

It's wonderful to have a dog in the family.

I think that this is a lovely post Gilly. I love dogs, but have never owned one (as yet, but it is in my retirement plan!!!). Dogs are very much part of the family and your post reflects this. They all look such lovely dogs

What a lovely celebration of the doggies in your life. We've always had cats but I can understand how much you love your pets and how hard it is to let them go.

What wonderful animals. We currently have 6 dogs - all of whom just decided to live with us: We're at the edge of town and stray dogs are not rare. We've lost our two original dogs, which were rescue animals, and were heartbroken. Your story about your digging dog, Ben, reminded me of our Snickers, now gone, whom we considered sending to engineering school because of his remarkable tunnels.

We also currently have 3 cats. We also once had a Banty hen who stayed with our biggest dog and ate his food. She roosted in the apricot tree in the summer and in a heated shed in the winter. She led the parade when we went for a walk around the garden lot. It must have amused the neighbors - a bossy little hen leading a woman holding a cat, followed by dogs and sometimes other people.

I am a "cat person" but think dogs are lovely. I can sit in my windows and watch them being walked and getting to recognise them now and their cute and funny little ways. Lovely pictures and stories of your pets, wonderful memories.

My son Max is named after his Great Uncle Max, but we tell him that he was also named after all the dogs we've loved named Max. :)
I can't imagine my home without a dog, though we went through such stress last year with our puppie Gracie. I think she was missing a few screws in her head. She was impossible and sadly we had to give her away.