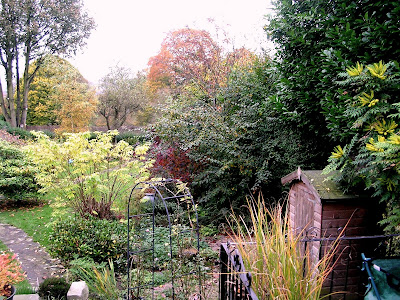 No, I'm not jaundiced! But leaves and trees all seem to be shades of yellow at the moment. Above is the view from our back door into the garden, looking over the Park towards the hills. We can only really see the hills when the leaves are off the trees in winter, but I noticed this morning seeing a couple of lights twinkling on the hillside, as so many of the leaves came down when we had some very high winds. 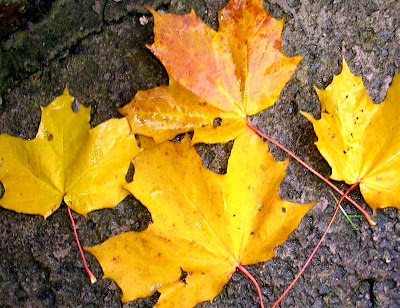 We have a few maples in the Park, their leaves are a gorgeous colour now. 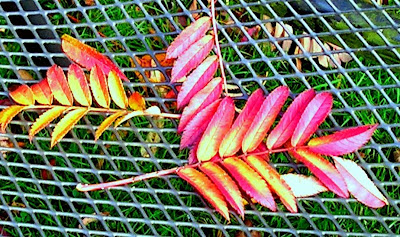 Our little Rowan tree, which I proudly announce I grew from a seedling I found in the garden, turns a gorgeous shade of red, but drops its leaves very quickly. 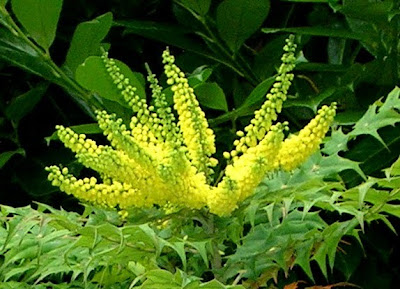 One of the loveliest flowers out now are the Mahonias. Ours grow in a rather unfriendly space by the shed, but come out every year without fail. As the flowers fade, the blue tits come and eat something there - its not berries as they haven't formed yet, and they are not eating flowers! 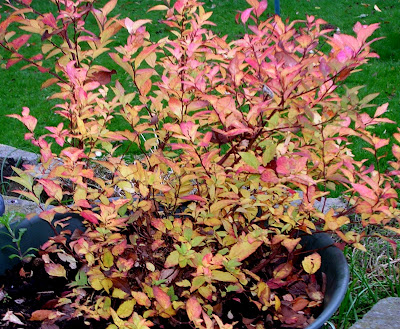 One of our shrubs on our patio has made a bright blaze of orange, right outside my kitchen window. I think its a Golden Spirea, but whatever it is, its great! 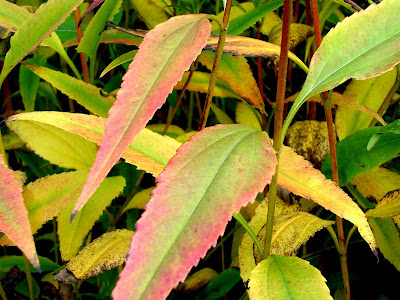 The sunflowers are over now, but their leaves are turning a very pretty shade of pale yellow. They will all have to come up this winter, as they are very keen on taking over the garden! They have taken over the bed they were supposed to share with day lilies, and are now eyeing the lawn! It will be a dreadful job digging them up, as they are like the dreaded Ground Elder - every little bit of root enthusiastically grows into a new sunflower plant! I don't think Mr.G or I will be able to do this, in fact I know we won't, so help will be sought!

I suppose really those dratted sunflowers are like anything we know we ought to get rid of - habits, weight, obsessions or addictions. Leave even the tiniest bit behind and before you can turn round they are all over you again.
Posted by Gilly at 14:53 11 comments:

A great time with my sister! 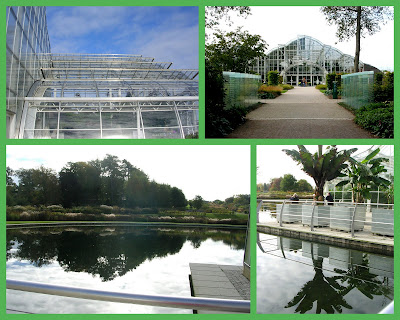 I went down to stay with my sister who lives in Surrey, UK. South of London, for those who don't know our green and pleasant land! We had a great few days together. The first day I was there she took me to the Royal Horticultural Society Gardens at Wisley, which are quite near where she lives. We went to the new Glasshouse. which has tropical and temperate (wet and dry) zones with all the appropriate plants. It is a fantastic building, mainly glass, and with a lake outside. The plants are HUGE, big, big leaves, all looking totally natural, like a forest! 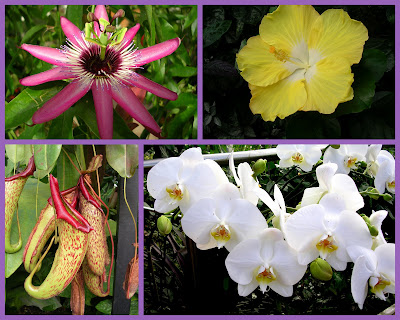 The flowers inside were gorgeous - passion flowers, lilies and things we didn't know the names of! I am sure they were all labelled, but everything had grown so much, some of the labels were hidden. 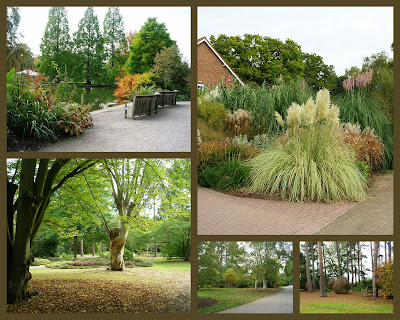 The grounds are vast, and as I am disabled, we took the little electric car, which is manned by volunteers, and takes you on a circular trip round the various areas. On the way to the Glass house, the driver went rather fast, asnd we were unable to view the beautiful dahlias and Michaelmas daisies as we would have liked. But on the way back he took a wrong turning, and so we saw a great deal more of the various trees than we would have done! The collage also shows the wonderful grasses there, and one of the play areas for children, where little beehive-shaped huts have been woven for them. (The pictures should enlarge if you click on them) 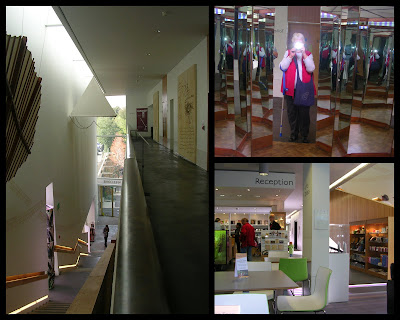 On Friday my brother-in-law took me to the Light Box in Woking, which is a sort of Art Gallery/Museum, built in a very contemporary, hands-on way. There is a little shop, a great cafe, and that particular week, the most marvellous exhibition on Leonardo da Vinci. Some institution or University (I forget which!) had made scale models of many of da Vinci's machines. They were large scale, made in wood and mind-bogglingly marvellous! Some were hands-on, and it was amazing to see how this one man had invented such things as ball bearings, anemometers and other bits and pieces of engineering, long before the industrial revolution sparked off such inventions. My brother-in-law is an Engineer, and we both spent ages looking at the machines, the guns and da Vinci's flying machines.

The upstairs gallery concentrated on his art. I was getting very tired by that time, but one thing really held my attention. In a heavily-guarded, alarmed and temperature and humidity-controlled case was one of da Vinci's original notes books! I was amazed at how small his writing was, and with a quill pen at that! He wrote from right to left, as he was left-handed, but I was awestruck at seeing his original vellum notebook.

The exhibition is going around the world, I gather. If you get a chance to see it, do go.

I wasn't allowed to take photos in the da Vinci exhibition, but I did take a shot of me in a mirror house, and a general shot of the stairs and gallery. 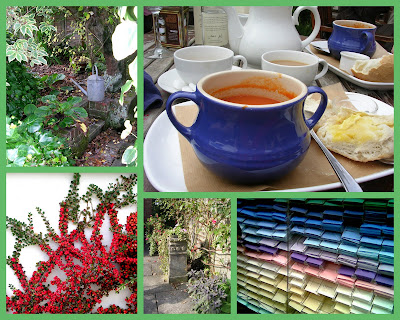 My sister is a very devoted gardener - she knows all the names of her plants(including the latin ones!) and cares for them tenderly! We were able to sit in her garden and enjoy the sun, and there are three pictures of her garden, including the cotoneaster berries against the house. The other two are a lunch out (tomato and basil soup, since you ask) and racks and racks of lovely coloured paper at the Hobbycraft shop. I love paper, and stood staring at the gorgeous colours.

Now its back at home, wishing the sun would come out, that my washing would dry, and that the dog hadn't gone all over my kitchen floor with his dirty paws!

Still, happy memories help to make the grey days go past!
Posted by Gilly at 13:49 16 comments: 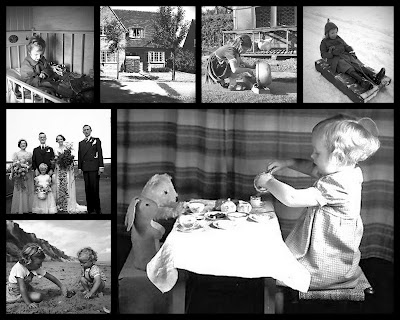 Next week I am going down to Surrey to stay with my sister for a few days. Recent phone calls to her have got us both remembering the days when we were small. One thing I remembered would spark her off to something I had forgotten, and so we went on.

I think it is valuable remembering things that happened, and doing it with other members of the family. Often what we always recalled as odd or even had never understood, become perfectly clear when brought into the light of collective memories.

My sister had always thought her little red bicycle was bought specially for her, but I myself had had a little red bicycle, and in the summer that World War II ended it was obvious that "my" bicycle was handed down to her. I got a grown up bike, ready to cycle to my new Grammar (High) School, but it was almost certainly second-hand at that time of austerity.

So today I have posted a collage of photographs taken by my father, all before 1945. The big picture is of me at a "tea party", and the others, from the bottom left-hand corner upwards are:- Me and my sister at the seaside in 1939; me as the littlest bridesmaid at my Uncle and Aunt's wedding; Christmas morning; Our house that was subsequently bombed. You can see the sandbags protecting the front door; feeding chicken (and I hated cleaning them); and me sledging in the winter. We didn't always get that much snow!

It seems like another age now, which I suppose it is. The UK and Europe were never the same after 1945 and the years afterwards, when shortages and rations were the order of the day, moral standards were changing (or slipping according to your outlook!) and thousands of refugees moved across Europe as they sought their homeland.

Sometimes we look at the changed world we live in and wonder how our children will cope. The answer is, of course, that it will all look perfectly normal to them, and they will just get on with living their lives, albeit in a way we perhaps can't imagine, or even understand. I know my own mother would never be able to comprehend the problems that faced me as I brought up my own family, any more than I can fully take in the stresses that my daughter is under. (I do try, Sue, honestly!)

All we can do is the best we can, and pray for God's help, protection and strength for our children, grandchildren and great grandchildren.
Posted by Gilly at 13:46 16 comments: