Like a lot of the country, we had fog yesterday. All day. It was very cold, and the dog got lost!

But the fog changed all the usual ways I look at the park. Distances were deceptive, perspectives altered. Trees that normally looked quite innocent loomed up at me in the fog. My imagination got going.......

Just supposing those trees were actually moving, slowly, a bit at a time, at night? Gradually the woods moved nearer the town, the roots pushing up the earth a bit every morning, like giant moles. Over a week or so, they reached the fences at the bottom of the gardens. First the fences shifted slightlhy, then bulged, then the weaker slats gave way, then the whole fence was down, and the huge trees stood menacingly at the edge of the lawn. Next it would be twigs rapping on the windows, tap, tap, tap at first, later more insistent. Then a fat branch knocked, and the glass shattered, the branches reached in. More glass shattered. The walls bulged, a brick fell, then another..............
Posted by Gilly at 09:49 2 comments: 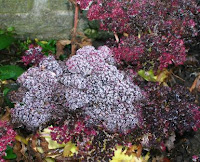 Its hard finding colour in the garden these days. All the glorious autumn leaves have dropped now, forming a rather squelchy mess. Even the weeds look brown and discouraged. But in the unaccustomed sunlight, I wandered around with my camera, and managed to find some real beauty. Just shows what you can find if you go slowly, rather than rushing around, thinking these's nothing there.

Perhaps we should all slow down. On http://www.mousenotebook.blogspot.com/ there's a very thought-provoking post on going slowly.
Posted by Gilly at 11:28 7 comments: 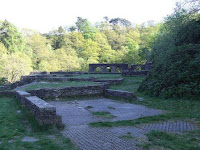 THEY WALK ON THE HEARTS OF THE GIRLS

They drowned the village
demolished the Hall, and used the stone
to build the dam, which flooded the valley.
It brought water to the townsfolk,
who now walk in the quiet woods
exploring the ruins of the once grand Hall
and exclaiming at what was formerly so magnificent.

But they walk on the hearts of the young girls,
who scrubbed and polished, swept and dusted,
fetched and carried and curtseyed
for fear of losing their jobs.
The graves on the mount behind the ruins
are those of the rich and powerful,
remembered in stone forever.
The rest, who only mattered to their families,
are now lost beneath the waters
and no one remembers.
Ruins of Errwood Hall, Goyt Valley, Derbyshire
Posted by Gilly at 14:22 1 comment:

Lights in the darkness 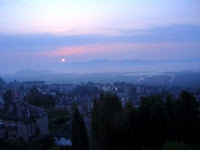 Now that the trees are leafless I can see the lights of the town across the valley. Lines of sodium street lights climb up the hill, and disappear into the darkness at the top. When the wind blows the lights seem to flicker and dance behind the swaying trees. On calm nights , or in our dark mornings, I can see the headlights of cars as they stream down the main road into the town. They dodge and disappear as they wind round the many S-bends on the road, until I can just see them on the last stretch into town.

Further up, beyond the town, lights sometimes shine from the farmhouses on the side of the hills, and right on top of the ridge, to the south, are the headlights of one or two cars driving alaong the small country road.I love watching the lights, imagining other lives, weaving fantasies, or just musing.
The picture is of a sunrise over Morecombe Bay, at the edge of the Lake District.
Posted by Gilly at 09:31 4 comments:

There can be some lovely reflections in the lake in our Park. Usually I exclaim at the still ones, each tree, each bush, reflected perfectly in the water. A different, upside-down world. But I also like the reflections where the wind just ruffles the surface. A wind of change, indeed. There is that rather wobbly look about everything, as though a giant hand was gripping hold and shaking it backwards and forwards. And maybe I should give my life a shake up - do I want to be doing exactly the same things next year, and the year after? A perfect reflection of my life now? And the answer - No, no, a thousand times no! If I thought the rest of my years would be more of the same, I'd curl up somewhere and quietly expire!
Now then, how can I change my life to get a bit of zip into it? Answers on a postcard, please!
Posted by Gilly at 13:47 3 comments:

Spent a beautiful afternoon cutting down old perennials and bits of shrubs and generally tidying up in the garden. Filled our "green" recycling bin which the council collects next week, and put the soft stuff in our compost bin. Well, we do try!

Then took the dog out, and the low sun in the park made the fallen beech leaves really glow - a lovely deep russet red. We are so lucky to have the park right at our back garden, though in the summer you have to watch out for flying golf balls (there is a small golf course behind our fence!) and young teenagers can get a bit silly and noisy! But generally, we tend to regard it as part of our "estate"!!
Posted by Gilly at 15:27 No comments: 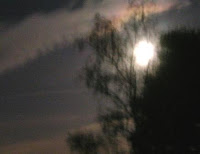 It was a full moon last night. For the first part of the evening it tried hard to kick the clouds out of the way, and shone through the trees. but rain and cloud beat it in the end. But it was still there!
I love moonlight. Silver and black instead of the colours we are used to. Shadows that seem to very black, melting slowly into shapes that are strange. Everyday things take on different shapes. The grass seems to take on a sparkle, trees are a lace-like curtain for the clouds.
It would seem a form of witchcraft to our ancestors to know that man has walked on the moon. Sometimes it seems impossible to me, although the Harvest Moon, is so close I want to bring it down from the sky!
Posted by Gilly at 16:34 3 comments: 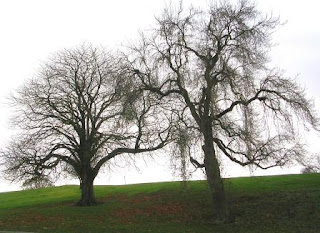 The brisk winds have stripped some of the trees (although the glorious beeches are still holding their leaves, as are the larches, and some of the brilliant trees-I-don't-know-the-name-of because they are ornamental "park" trees.

But my favourite "Lady Ash", bangles and scarves a-blowing, ditzy to the last, and the "Career-Girl" Horse Chestnut beside her, branches all correct, and ready to blast her co-workers!

OK, I get a bit fanciful when my thoughts, dream and who I am is held in! Just don't ring for the men in white coats - I function quite well, really!
Posted by Gilly at 10:11 2 comments:

I've been sorting out some bits and bobs of jewellery for a Bring and Buy Sale. I doubt anything I have has a monetary value, but everything reminds me of someone, or somewhere.

The ancient Viking set in Scottish stones was bought on the Isle of Iona, over 40 years ago. We had gone camping in Scotland, and managed to get very wet! Iona was beautiful, there was a calm and peaceful atmosphere there that I have rarely encountered again. The little shell bear was given to me by some friends who visited Canada, and is greatlhy treasured.

The three crosses all have stories behind them. The silver one, which I wear often, I bought at a Monastery on Crete, the time we had a very nasty accident on our scooter. My husband spent three days in a Greek Hospital, but I was thankfully not injured, and brought fruit and yoghurts for him to eat. The cross was bought in a spirit of thankfulness. The flowery cross I found at an Antique Fair. It is most unusual, but the woman running the stall could not tell me anything about except whe was told in was Italian. The green-y polished stone cross belonged to my sisters Mother-in-law, of whom I was very fond, and I was so pleased when my Brother-in-law gave it to me after her death.

The red wooden beads I am wearing now. They were bought in Austria, our first holiday abroad about 37 years ago. Some of the necklasces have been given to me, some have been bought at flea markets, as have most of the other brooches.

Its going to be quite hard to let some go for the bring and Buy Sale!
Posted by Gilly at 09:15 2 comments: 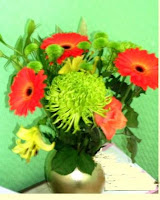 Sue brought me a wonderful bunch of flowers for my birthday. The Gerberers really glow, and make the hall so welcoming. Like glowing lights in windows they are calling"Enjoy us! Enjoy life!" Beacons of what? Hope? Love? Both of these?

They are beautiful, anyway. Thank you, Sue
Posted by Gilly at 11:06 1 comment:

It was so quiet in the Park just now. A cloudy, very slightly misty morning, and absolutely nothing stirred. No wind, no dog walkers, no sirens screaming along the main roads. It felt as if I held my breath and stood very still, I could go somewhere else, through time and place.

But you are never alone with a dog, so the spell was broken. But then I found a golden leaf sticking to the middle of my walking boot. It looked like one of those very old fashioned buckles people used to wear on their shoes in the 16th (?) century. And I got wondering who had walked that spot before me. Not as a Park, of course, but the land was farmland for centuries (the old farmhouse is still there, modernised, but parts still visible). Men must have ploughed it, or gathered cattle and sheep. Could I hear their footsteps if I listened? Could I sense their emotions?

I would dearly love to be able to go back in time and see how people really lived, outside of the history book accounts of how others thought they lived!
Posted by Gilly at 10:31 3 comments: 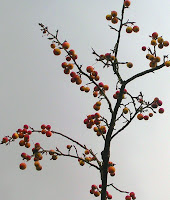 The birds haven't found these tiny apples yet, though they don't seem to like them much at this time of year. A few hard frosts soften them, and then little beaks and small teeth can get past the skins.

A short walk this morning, as I overdid it working in the garden yesterday, cutting down old sunflowers (no, not the sort with seed for the birds!) and my back and legs are extremely painful. But they will recover with a bit of rest and TLC.
Posted by Gilly at 10:19 1 comment: 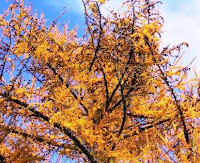 I do love trees, especially at this time of the year. Comes of having an autumn birthday I suppose (today, actually!) The fir trees in the Park are now showing their glorious golden needles, which look wonderful against a blue sky, contrasted with the black branches.

Come the Spring, though, I am only too glad to find the tiny green buds sprouting from those black branches, and memories of wet cold winter beginning to vanish. But change invigorates me, and I think I would be a very dull person if life jogged along on a dull, even keel all the time!
Posted by Gilly at 09:26 3 comments: