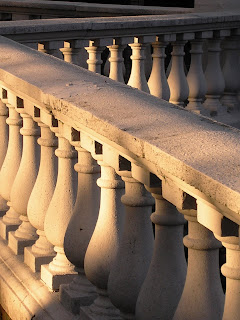 I love words. (I love maps too, but that is another story!) Balustrade is one of them. Seems to fit the shape, which is not surprising, as it comes from an italian word (and before that, greek,) for pomegranate.
Now that is another word I like. And hubbub, and Cappadocia, and...... I could go on for a long, long time!
I may be weird, but I always think you are never alone with a dictionary!
A Happy New Year to you all!
Posted by Gilly at 10:37 7 comments: 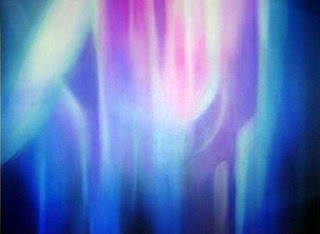 We had a wonderful time with my daughter, her husband and in-laws. All very easy to get on with, but this introvert is now "peopled out".
A delicious meal, and lots of fun, lots of presents, plenty of chatter, and news exchanged. Very quiet without the boys, who are in New York with their father.
Now it is a gorgeous bright day, sun shining, new bicycles being tried out in the park, dogs running around, and I am enjoying a quiet house and a browse round the world on the comuter!
(The picture is "Heaven" by Charles Andrade)
Posted by Gilly at 10:38 3 comments: 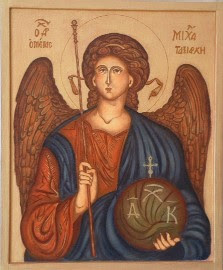 Angels, from the realms of glory,
wing your flight o'er all the earth;
ye who sang creation's story,
now proclaim Messiah's birth:
Come and worship,
come and worship,
worship Christ, the newborn King.
We used to sing: "Gloria, gloria, in excelsis Deo,
Gloria, Gloria, in excelsis Deo"
I prefer that!
A happy, blessed and peaceful Christmas to everyone who reads this.
Posted by Gilly at 10:33 1 comment:

Getting ready for Christmas 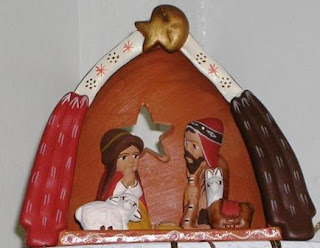 I'm now getting the feeling of Christmas and have started getting the tree out and the decorations up. Such as they are! Now there are only the two of us, we don't bother so much.

But when I was younger, it was quite a ceremony. Out would come the box with the paper chains and paper balls and bells in. Tears would be carefully mended, and the living room ended up with chains all round the edge and across the ceiling! Lovely! I don't know where my parents got the decorations from, they were several years old when we had them, I rather think they were given them by some neighbours. But whatever their origin, Christmas wouldn't have been Christmas without them! Even in the wartime, when we had to keep an ear cocked for the sirens.

Now we have a tree, and the Christmas cards up, and my little Nativity scene, which I love. Especially the llama, who looks rather surprised to be there! 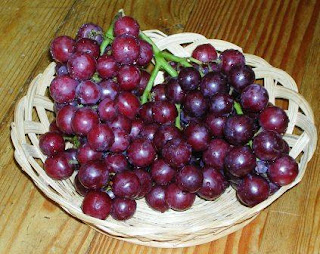 The other nice thing about Christmas is, of course, food! Not if you are trying to lose weight, but there are lots of things we rather plump ladies (!) can eat. So I am looking forward very much to going to my daughter for Christmas Day. She is a wonderful cook, and also makes the rooms and the dinner table look so very decorative. Just like in the magazines, only better!
Posted by Gilly at 15:03 4 comments: 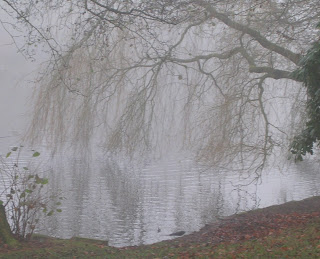 I love reflections. Usually nearly the same, but not quite. And looking at ourselves in a mirror is quite odd, as that is not how others see us. We will always be reversed. But then I never see myself as others see me, anyway!
But I do love the symmetry in nature. Leaflets that go neatly opposite each other, or alternately. Never one out of place. Petals fitting round the centre of flowers. And when we start looking through even a magnifying glass, let alone a microscope, life is simply amazing!
These trees in the photo are alders, and small finches and tits love the cones. If I am very lucky, a little flock of mixed finches and tits will be chattering through as I go pass, intent on their feeding, ignoring the galumphing world of humans!
Posted by Gilly at 09:20 5 comments: 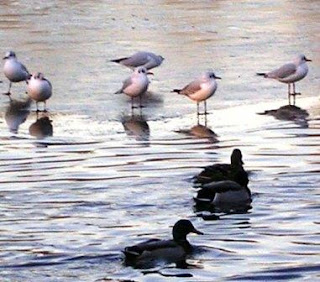 The sun is out, the birds are singing, and the ice is gradually thawing from the lake. The birds still sit around on it, looking hungry, and swoop in screeching hordes when anyone appears who looks remotely as though they have food for them! 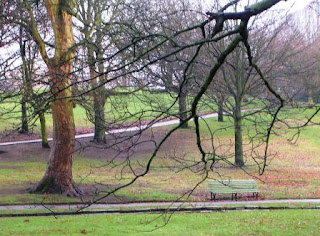 Sometimes I feel a bit like the lake: All seems to be good around me, but inside I am icy, unable to feel anything much, either good or bad. I get lonely, and yet cannot bring myself to do anything about it, like go out to meetings where I know I can talk to people. Withdrawal is the name of the game.
But getting like that just leads to more misery, as I well know, so I am now making a big effort to SMILE and TALK to people!
Posted by Gilly at 11:48 5 comments: 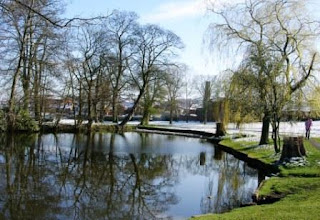 He stood alone by the lake,
an old man, in a coat
that had seen better days ten years ago.
Carefully crumbling bread
that might have done him some good,
he threw it to the cacophony
of ducks squabbling in the water.
"Come on my beauties" he said
"no pushing and shoving, now".
Gently he threw some to the shy ones
pattering on the edge of the mob.
Then turning away he called an old black dog
with a grey muzzle and arthritic legs.
"That's it for today" he said
"All the excitement's done now".
And together they walked slowly
towards the gate.
Posted by Gilly at 10:19 4 comments: 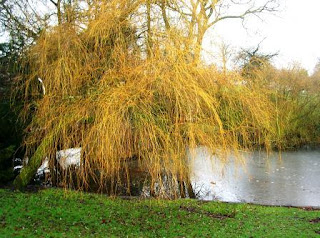 I thought there would be nothing to photograph today, but then I found this beautiful weeping willow in all its winter glory! Praise God there is something to cheer us up on a grey day.
Posted by Gilly at 11:00 2 comments: 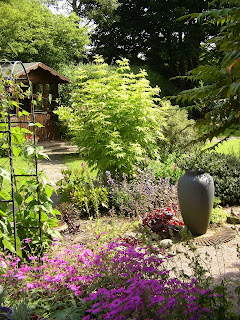 Its a cold, wet, rainy, slushy and slippery day here.
So I thought I'd post a sunny photo of our garden a couple of summers ago. 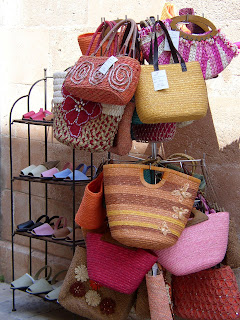 Plus something cheery from foreign parts!
Posted by Gilly at 10:27 3 comments: 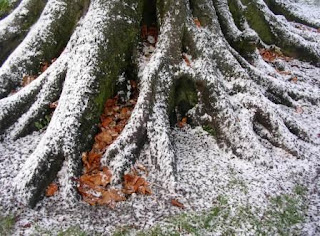 Winter has come, and it snowed quite hard last night, though it is all melting now. The dog adored it, and raced around, getting soaked in the process. 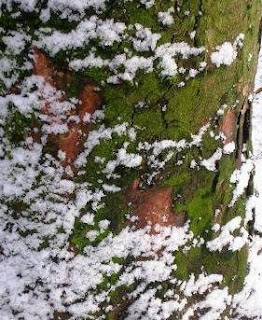 I loved the way the snow had blown against the trees, making an interesting pattern.

I was touched too, by the concern showed by one elderly gentleman, that I didn't slip as I walked with my crutches. He pointed out that I was quite isolated in the Park, which was true. Where were all the dog walkers this morning?

But it wasn't as slippery as it looked, and I survived. But its good to know that people care. Even if they are as old as I am!

But getting back home, I lov 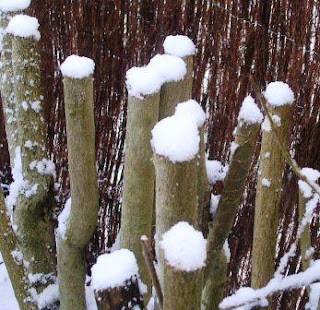 ed the snow hats on the hedge we cut down (in the fond hope it would sprout out again!)
Posted by Gilly at 10:30 3 comments: