Our next port of call was Palma.   We had visited it years ago, and I was astonished at the building and change that had gone on since we were there.    We moored quite a way from the town, and the journey in to the centre by the free shuttle bus was not only longer than I had thought it would be, but heavily built up all the way, with hotels, office blocks and blocks of flats.

However, the bus dropped us more or less outside the Cathedral.   The area there, and the park next to it was all on reclaimed land - when we were there it was beach!   We decided to keep to the old town, neither of us wanted to go shopping.

Going towards the cathedral, we crossed the park, which had a large lake and fountain.   The Spanish are very fond of water and fountains and here in front of the cathedral precinct, was no exception. 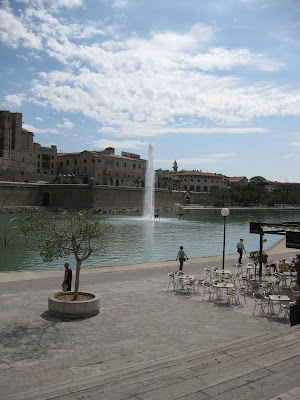 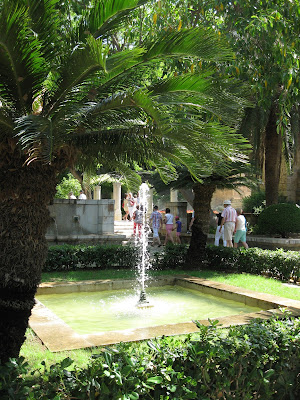 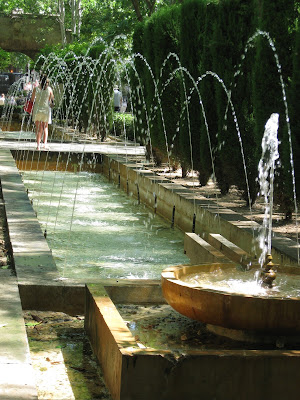 Deciding that rather than aimless wandering around the old town, it would be better to have a definite place to aim for, I announced I wanted to see the Arab Baths.   I honestly hadn't a clue what they were, except that I had read they were worth seeing!

We walked along beside the cathedral, and then along the narrow streets, and finally arrived at the Arab baths, which had been well sign-posted, so I felt they were obviously a tourist attraction    I was amazed when I got there.   We went through a narrow passage and came out in a pretty walled garden, with four square plots of trees and plants.   It wasn't very big, but was quite delightful.   The entrance to the baths was  narrow and keyhole shaped, and inside was a biggish sort of chimney shaped area, corbelled up to three holes in the roof.   There were notices explaining how the baths worked, something like Roman baths, with warm, hot and cold areas.   The arches that kept up the roof were beautiful, and in very good nick considering they had been there since the early 11th century! 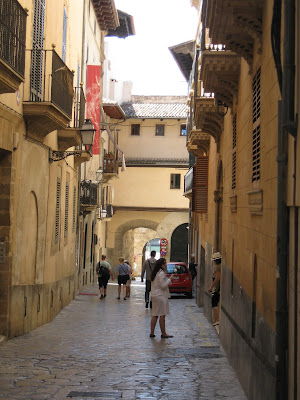 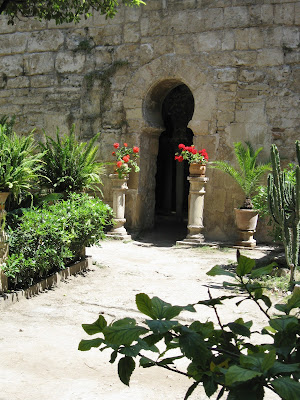 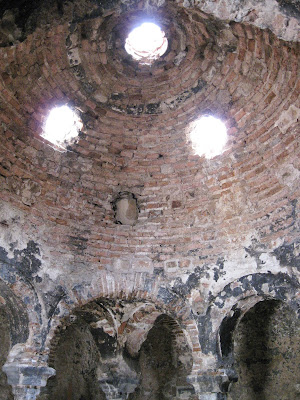 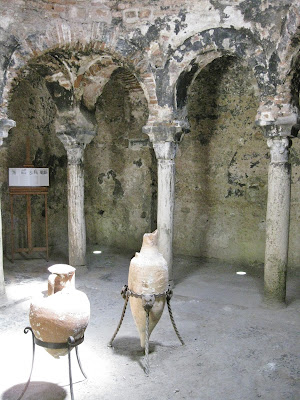 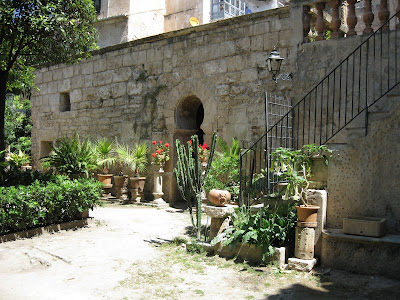 After all that sight-seeing, we wandered back and found a shady place to have lunch, then just walked round the marina and looked at the yachts.   Some of them must have been worth millions of pounds!

And then it was back to the ship, and a farewell look at the old town from the Port area as we set sail. 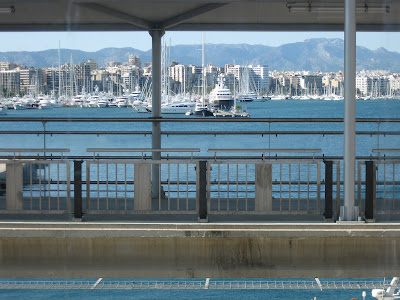 Our next port of call was a small town called Sete, on the western end of the bit of France that borders the Mediterranean.   We were pleased we were calling there, as one of the excursions went towards the Camargue, and we hoped to see birds and maybe, even, white horses.

"White horses" on the waves were in evidence as we anchored outside Sete, and the swell was too great for the tenders to be used.   We all waited a fidgety and anxious two hours before the swell had died down enough for us to board the tenders.   Even so, it was a bit hairy as the ships went up and down, totally out of sync with each other!

The coach set off at a very brisk pace towards Aigues-les-Mortes, a fortified medieval town on the edges of the Camargue, our destination.   It was further than I had realised, but on the way we called at Grande Motte, a specially designed seaside town, with a big marina, beach and some very interesting-looking buildings! 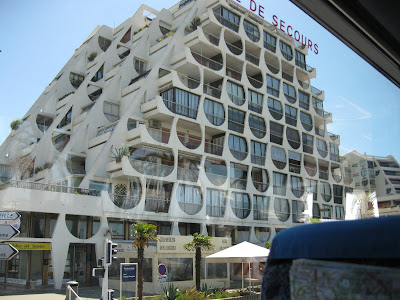 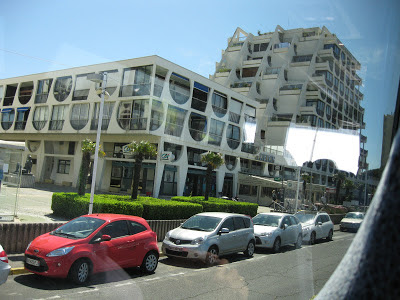 These were both taken as the coach went slowly past, and the guide told us that most buildings were built on a pyramid shape, partly because of the sandy nature of the ground there.

When we got to Aigues-les-Mortes, the guide took us outside to show us the massive towers which are at each corner of the square town, and then we were more or less free to do our own thing. 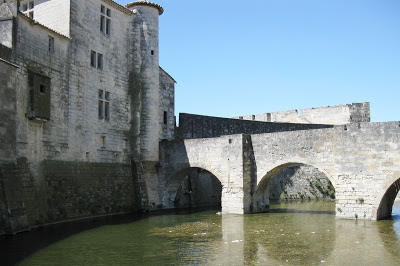 There was a moat outside part of the walls, which were absolutely massive. 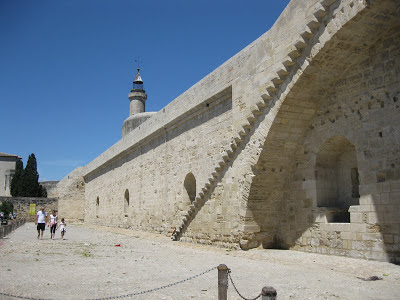 You could walk along the ramparts.   MrG went up there but not having a head for heights, and not fancying all those steps, I stayed firmly grounded! 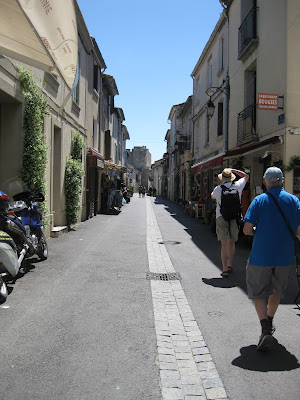 The streets were narrow, with a gutter down the centre.   Not hard to imagine the smells there would have been in medieval times! 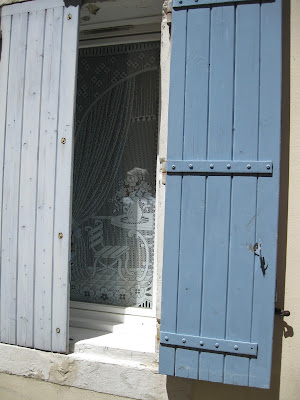 All the windows had shutters, and I spotted this pretty curtain inside the window. 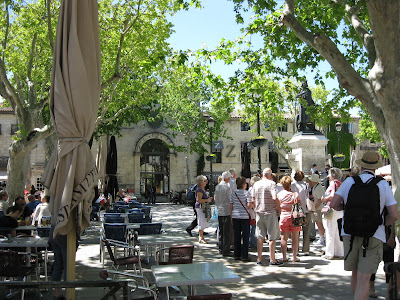 Being a Sunday, the restaurants and cafes were full of big French families enjoying long, relaxed meals in the sun.   It was almost impossible to find a place where we could get a snack, so we finally ended up with a gorgeous ice cream each.   Then found somewhere selling sandwiches.   Too late!

On the coach journey there we saw a lot of the salt pans that were one of the principal industries in that area, and in many of the watery pans were big flocks of flamingoes!   It was impossible for me to photograph them, partly because I was on the inside seat on the coach and partly because my camera does not have a very good zoom lens.   So you will just have to imagine them!