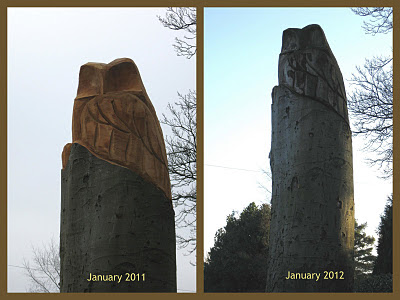 Its exactly a year since the Man with the Chain Saw started carving birds on the trunks of trees that had been cut down in the Park. I took my camera along as I thought it was amazing how well/badly the carvings had weathered.

The Owl stands at the entrance to the small car park. It is hard now to see that it is an owl. Which is a shame. But it just looks like an old tree trunk! 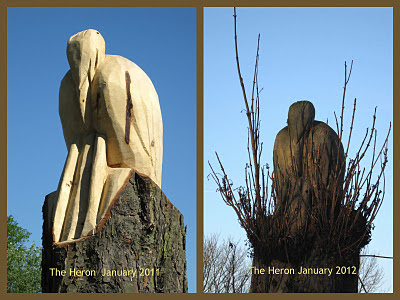 The heron has not fared well, either. Although you can see it is a heron, he is surrounded by shoots from the tree (which obviously wasn't dead in the first place!) I think it is a horse chestnut, and when the leaves come out, our heron will be invisible! Unless the Park People snip off the shoots. 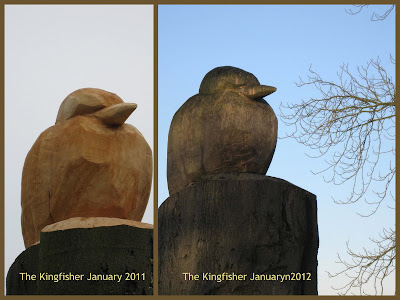 The Kingfisher, on the other hand, still looks lovely, and rather smug. 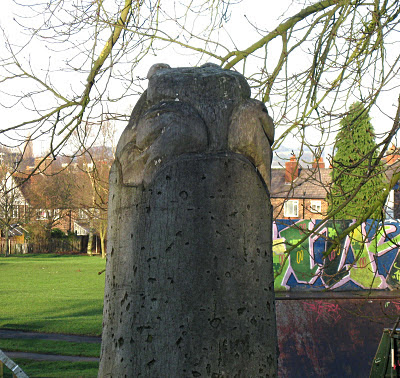 Now when I took photographs last year, the frog hadn't appeared. He was bright new wood when done, of course, but again, its hard to see he is a frog. However, when I saw him in the pouring rain a few days before I took the photo, he looked lovely, as frogs do in the wet!

It was very hard to take photos from the same position, as I couldn't remember quite where I had been, and it was very muddy, and I was in danger of slipping over!

The Park is just beginning to wake up from its winter sleep. The snowdrops are up and in bud, but their heads have not turned down yet. The ornamental bushes are beginning to sprout, and the willows are definitely looking a bit springlike. The Witch Hazel flowers are coming out, but not enough to make a decent photograph!

The two swans are still here, and the ducks look as though they have paired up. I will try and take some good photos of the swans for next time. Its very cold here today, but lovely and bright, so I might try to get clicking away this afternoon.
Posted by Gilly at 10:26 11 comments:

SPRING IS ON ITS WAY ! 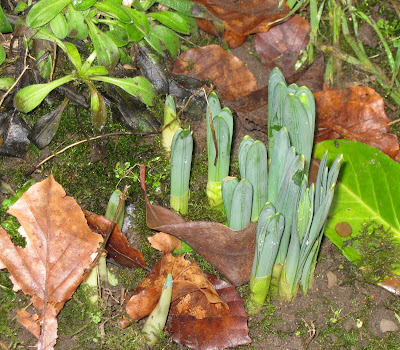 It is a beautiful morning today - the high winds from the last few days have dropped, and the sun is out! I wanted to take my camera with me when I took the dog for a walk in the Park, but it is too difficult to manage with a dog at the extreme end of a long lead, wanting to get on, a stick in one hand, and my camera in my third hand!! (If only!)

I had to keep the dog on the lead as he has been quite poorly - entirely his own fault, I might add, as he did a runner on me on Tuesday and found a lot of rather nasty bread. He was so ill afterwards I wondered if he had been poisoned, but the Vet didn't think so, and he seems very frisky today. His dinner has progressed from nothing at all (yesterday) to plain boiled rice and a small amount of poached chicken. Poached in the microwave, not obtained at night with a gun!

So I had to use my ears and eyes and not my camera this morning. The birds were twittering away, I heard sparrows and tits (two sorts) I spotted a robin, and the gulls and ducks on the lake were making their usual cacophony!

The snowdrops are very nearly out, the buds are there, but they have not dropped their heads yet. Bulbs are coming up, and the ornamental bushes are beginning to sprout tiny leaves.

In our own garden the bulbs are coming up. The picture above was taken last year, but they looked identical this morning! We keep the bird feeders filled, and have had Redpoll and Siskins, plus the usual Greenfinches, sparrows, Great and Blue Tits, a Coal tit, Chaffinches and a Robin. But we have not had the numbers we had last year. Still there is a lot of winter to come yet, and presumably there is a lot of natural food around for them.

If the weather is nice I will try to get out at the weekend, and take my camera. You must be fed up with reading about the Park and my Garden!
Posted by Gilly at 10:09 6 comments: 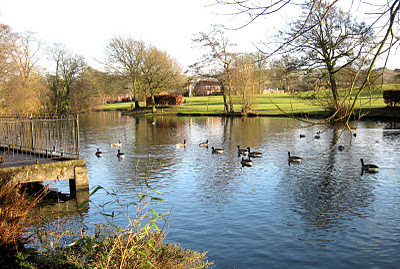 The sun is getting stronger, the birds seem to be pairing up on the lake, and the days are getting longer! Thankfully, this year is in total contrast to last year's ice and snow. It is mildish, sometimes windy, nearly always wet and constantly muddy!