My deepest apologies for any readers I have got left.   I don't seem to have had the time to sit down to write a new blog lately, but as I am suffering from a bad cold now and want something simple (?) to do, I have got going at last!

Our last port of call was Lisbon, in Portugal.  Going under the famous bridge was a close run thing for our big ship! 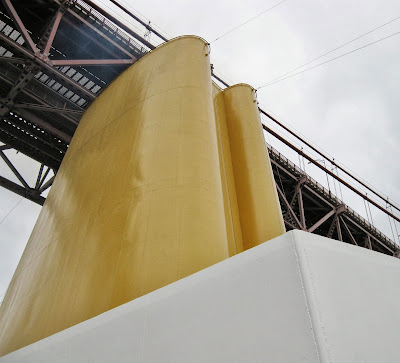 This is the capital, but not a tremendously enormous city, so we bravely set out on our own to explore.   Actually, we had been to Lisbon before, on our way to the Canary Islands, and enjoyed a coach ride round the city and a boat trip along the waterfront.   When we were there before we found Lisbon to be a bustling, beautiful city, with lovely tiled pavements and squares, with fountains on roundabouts, in parks and all sorts of places.

This time we took the shuttle bus into the city and were taken to a busy square, with buses trams, and a little market. 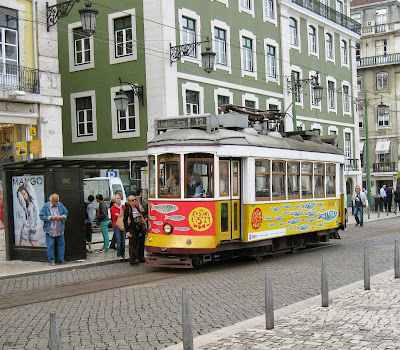 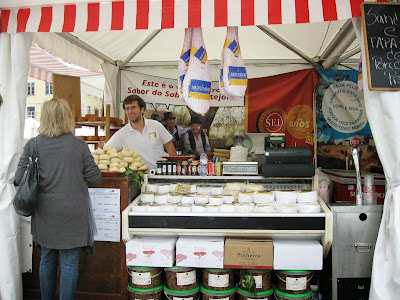 The young man here was selling cheese - it all seemed to be one sort, but I couldn't discover more about it.   I would have liked to buy some, but thought it might not travel well!

We decided to go to the Castle this time, and took a taxi as it seemed a rather steep walk up there.   The taxi driver was a bit put out, but eventually took us up, through very narrow winding streets - very much the old part of Lisbon. 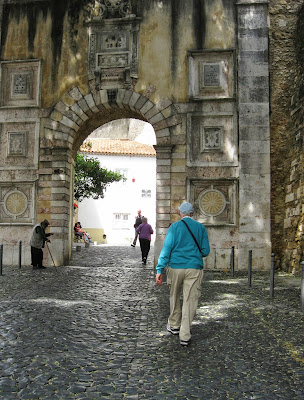 The Castle gateway had interesting stonework.   Note the beggar on the left - I was rather surprised to see beggars in Lisbon.   (The man on the right in a blue sweater is not a beggar - that's Mr.G!) 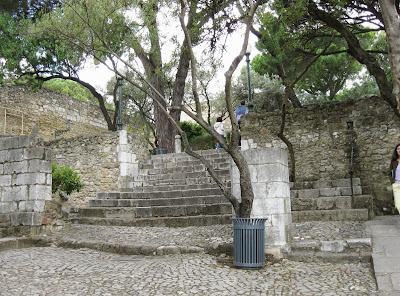 As Castles go, this one wasn't tremendously interesting, but the surrounds and gardens were old and rather lovely 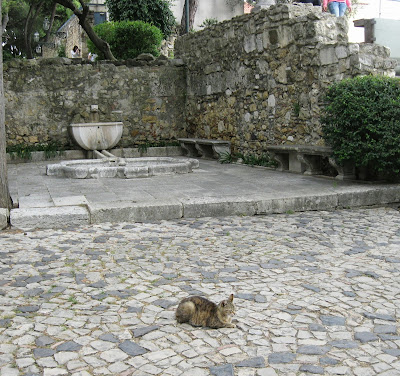 As was the guardian cat! 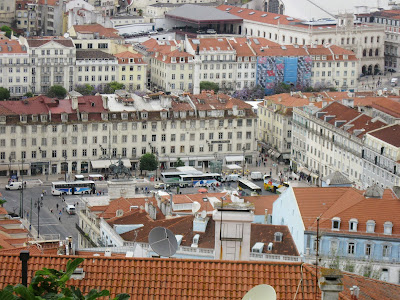 The views, however, were spectacular!   that was the square where the shuttle bus went from, which encouraged us to walk down back. 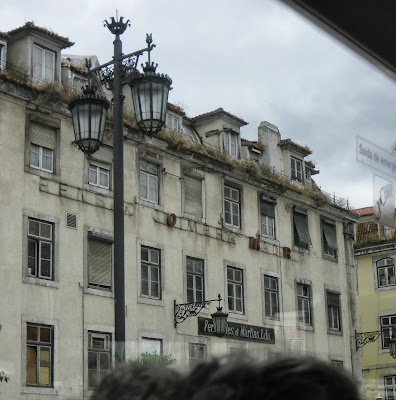 The square contained some rather tatty apartment buildings, with grass and plants growing in the gutters.

Walking down was quite an experience, but a tremendously helpful and friendly man in a tile making shop drew us an accurate map of where to get an elevator down to the bottom.   We would never have found this on our own.   It was free, unmanned (luckily there was another, Portuguese, passenger with us!) and they were busy building another one alongside.   We definitely saw a different side to Lisbon from last time, and I was glad we had made the effort to go out on our own.

Next stop, Southampton, and the coach home.   We did say that would be our last cruise, but I have noticed Mr.G looking at brochures!
Posted by Gilly at 10:22 2 comments: