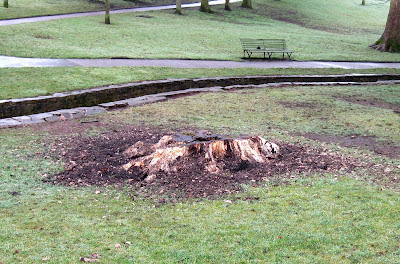 This is the tree stump of a tress that was cut down a few years back. It had been rotting nicely over the years, showing a fine crop of various fungi. A few months ago I noticed that the rotten wood had been scratched out, and to be honest, I thought it was kids.

But this week, large holes have appeared round it, and someone told me it was Badgers, looking for grubs.

Now we are really in an urban area, although one with plenty of green spaces, large gardens, and a few overgrown or untended areas. But I was surprised to think badgers would come so near us, into the Park. Then I read that they wander quite big distances in the night, looking for food. 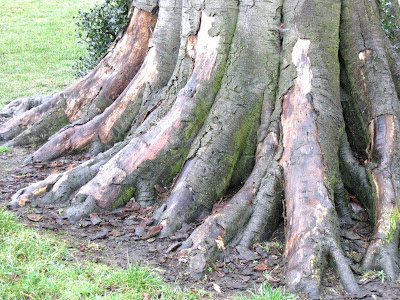 Now the half cut beech tree(see my link) has been stripped of its bark on one side. Again, I thought it was boys being destructive with knives, but now I think it might be badgers.

Anyone out there know much about badgers? They are such attractive animals. I once saw one ambling along a field path, and he (or she) was absolutely beautiful!
Posted by Gilly at 13:47 4 comments: 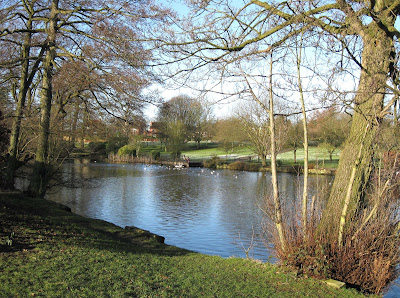 A glorious day in February can't be wasted - there aren't many of them! So I took my camera with me in the Park, and hopefully, these are views you haven't seen before!

This is looking across the lake towards the duck feeding place. Ducks, the two swans and Canada Geese when they are there are very quick to congregate when someone approaches carrying a plastic bag! 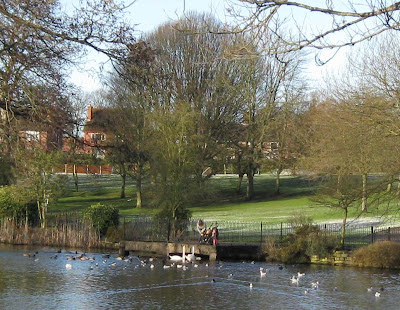 This is an enlargement of the duck feeders. Look directly above the woman, and you can just see our house through the trees! 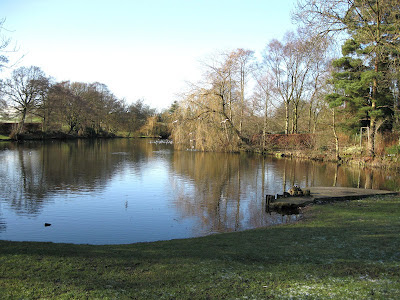 The water is very high at the moment. This is the top of the lake. There is an outlet there, which takes the water down to the River Bollin in a conduit, but I think it must have got blocked with leaves etc. At the other end of the lake a small stream feeds into the lake, so there is a slow movement through. The River Bollin is quite a nice river, it eventually feeds into the River Mersey and so to the sea past Liverpool. Much of the route of the Bollin is a designated Country Park. Behind where I am standing is a picnic area, with seats and tables, and a small car park. 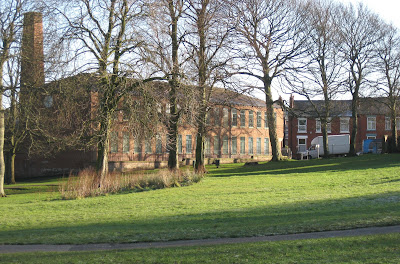 Park Mill is by the side of the Park. It used to be a silk mill, but is now used by small businesses. Macclesfield was a centre of the silk industry since silk was discovered and the silk worms inported. An old mill near the centre of town is part of the Heritage Centre, and shows how silk was woven. Jacquard patterns were apparently woven there. In World War II parachutes were made in Macclesfield. 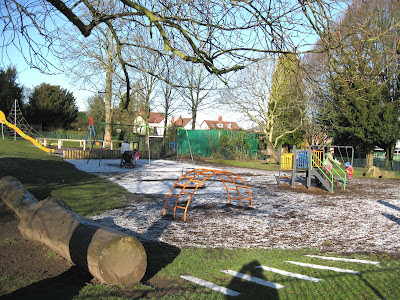 Lastly, we have a rather nice children's playground. It was recently refurbished, fenced in, and new apparatus installed. The ground is soft bark (yes, that is snow on it!) and the playground is very well used. The photo was taken at about 9.30 am - a bit early for children to start playing!

Hopefully we will have some warm Spring day,s and I can get out more!
Posted by Gilly at 10:38 6 comments: 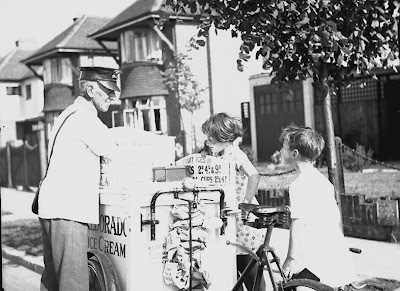 Long ago ice creams were bought from the "Stop me and Buy One" cart. This photograph was taken by my father in about 1936 or 1937. You can just see the prices - and those were old, pre-decimal pence, of course. In those days you could get a cornet, with a little cylindrical piece of ice cream wrapped in paper, which you peeled off and put the ice cream in the biscuit cone. And then you licked! The trick was to keep pushing the ice cream down with your tongue so that when you got to the last little bit of cone there was still some ice cream left in it! 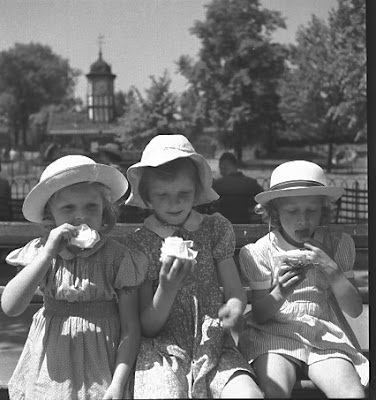 The alternative was the wafer. A rectangular block of ice cream with a biscuit either side. Much more ice cream than wafer biscuit, and hence more expensive. The photograph above is me (in the middle) with my sister on the left and my friend on the right. It was, apparently, taken at London Zoo in 1942. I cannot imagine what we were all doing , being taken up to London during at a time when the blitz was on, but my Father's indexing is impeccable, and that is what it says! Its obviously a lovely sunny summer day, so maybe it was a very quiet time!

I think we must have had our ices wrapped in paper napkins, to keep those lovely smocked dresses clean!

Ice lollies came in about the same time as the Stop me and Buy One truck, but were nothing more than frozen orange squash! It was a while after the war when other ices came, although the ice cream was still hard. My favourite was a choc ice - but you had to be careful to catch the chocolate when you bit into it, as it was frozen hard, and fell off the ice cream. Do you remember that?

Soft ice cream made an appearance - ooh! about the end of the 1950's I would think, though someone else out there might know. "Mr. Whippy" came round with his jingle bells, and you got a biscuit cone (much the same as pre-war, I think!) with a delicious whipped top of lovely soft ice cream. Ideal for smothering small children!

Now you can get an extraordinary range of luxurious ice cream, and they are no longer a treat for good children!

I still fancy a good solid choc ice, though!
Posted by Gilly at 14:07 8 comments: 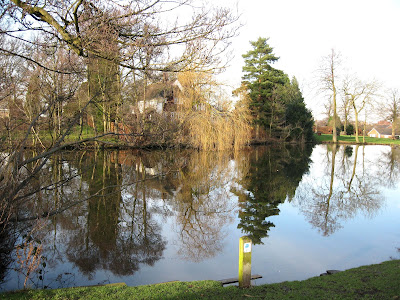 ...........I am a bad Blogger! I have been trying to get another post up, but never find the time. I have been particularly busy these last few weeks, with sorting and doing all the things a Secretary of an organisation does! Hopefully now it will settle down a bit, but I'm not banking on it! 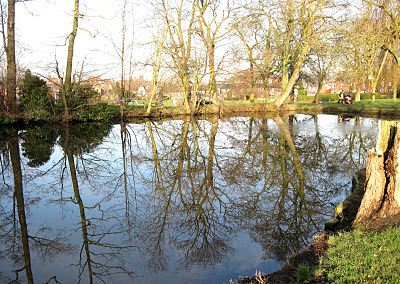 However, we have had some sunny days, so managed to take some photos, without losing the dog! Let off the lead he will do a runner over the park and far away. He just thinks its his garden, so why not?

Those two were taken while it was still above freezing most of the day even if we had very low temperatures (3 or 4C). 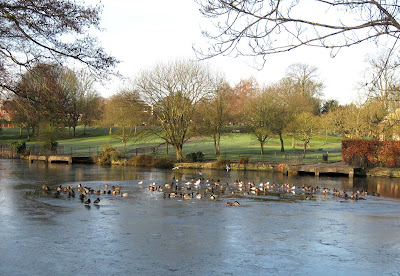 But it has got very cold at night as well now, and the daytime temperature barely rises above freezing. The lake has frozen and the ducks are restricted to a small pool in the middle. 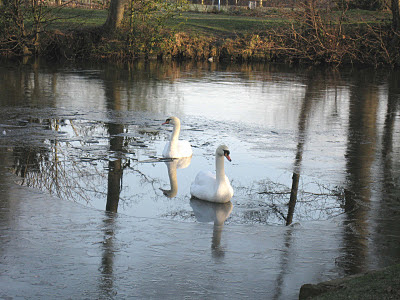 The morning I took this the swans were trapped in a tiny area, and were having difficulty breaking the ice to get out. I was a bit concerned, but Mr.G later reported that they had appeared at the duck feeding station, so were OK. He took a photo this morning to show me. They have joined the ducks in the small pool still available. If that freezes there are going to be some chilly ducks on the ice!
Posted by Gilly at 10:06 9 comments: