We have just come back from visiting Froghall Station, which is the terminus for the Churnet Valley Railway in Staffordshire. It is run entirely by volunteers, and every so often stages "events". Today's was a 1940's do, and there were stalls selling memorabilia, 1940's clothes and these wonderful hats! I loved them, but not on me! 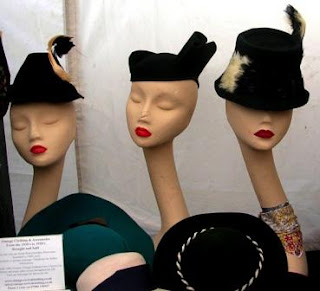 Loads of people had dressed up accordingly, and it mostly looked authentic. There were lots of military men in various uniforms, Navy, Air Force (both USA and UK) and Army (again USA and UK, and several German Officers in very tight black knee-high boots!) I have to say, a smart military uniform really does something for a man!

However, I do have a smile inside myself - I can remember the war very clearly, and it seems strange to me to want to dress up and wander around in the clothes and uniforms of that very awful time! 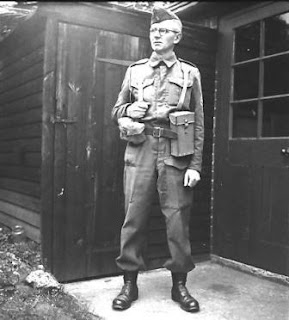 The above picture is my Dad in his Home Guard uniform, and below are me and my sister in our Air Raid Shelter, which was very well used, I might add, during the war. 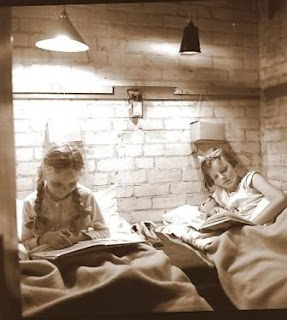 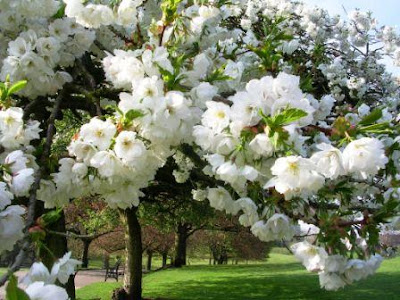 I originally took this photo meaning it to be just of cherry blossom. But when I got it up on my computer, I discovered it was more than that. A path, leading where? Well, actually I know, its in our beautiful park, and when I go down that path I have a choice of left, right or straight on over the stream!

But I am one of those people who must always know what is round the next corner! Many times I have walked further than I would have liked, just because I wanted to see what was next! (And then having to trudge all the way back!)

If I didn't want to know what was there, if I was just content with looking at a dead end, figuratively speaking, there wouldn't be much point in life, as far as I am concerned. I know others are not like me (Mr. G, for example, on walks!) When I suffered badly from depression some years ago, I couldn't have cared less about what was in the future, or what was in front of me. I would have been very happy with a dead end. Now I know I must always "see round the next corner". God is leading me there, and He will give me the strength to deal with whatever it is.

Meanwhile, the cherry tree is on my desktop, and I enjoy looking at it - when I am not in the park looking at the real thing!
Posted by Gilly at 10:17 7 comments: 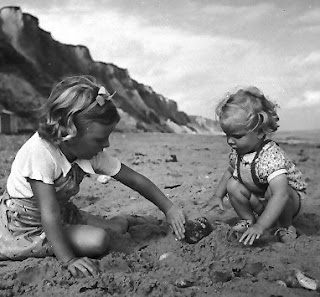 THE TURN OF THE TIDE

I watched the turn of the tide,
fingers of water moving stealthily
round half-buried stones, never
retreating, ever creeping forward.
As they united they filled the pools,
a breath of fresh life to sea creatures,
whose long hours of waiting were shortly to end.
Soon the pools had filled and only the
tops of the rocks were revealed, slippery
as the seaweed, like brown bubble wrap
waved with the incoming water.
Now the edge of the sea reached the
sand, and the defiant castles,
bedecked with turrets and flags
crumbled without a murmur,
collapsing to become a gently flat mound
of sand. And reaching the shingle, the waves
swashed and backwashed, rolling already
smooth stones to further roundness.

The packing up began on the shore,
wet sandy feet grated in sandals
wet costumes pushed into carrier bags.
rugs and knitting folded, the exodus began,
for a line of punk-green hair-like weed
along the sea wall showed where the
tide reached. The lure of ice creams
and tea emptied the beach
except for a man throwing sticks for his dog.
The tide kept coming, pulled by a force
unknowing, uncaring, unaware of us.
As it always had done, and will do
for ever.

Looking at this (very) old picture of me and my little sister at the seaside, made me think of the tides, they will never stop coming and going, whatever we do and however we mess up the planet. The sea can be gentle or angry, playful or dangerous. I love it. It reminds me there is an eternity. Not indiffrerent like the tide, but loving and caring.
Posted by Gilly at 09:30 8 comments: 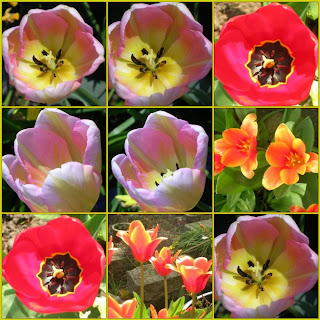 This is here for no other reason than I like tuplips. They don't last all that long, and the tall ones are vunerable to the wind, but I love the way they open and show off their interiors!

We had a lovely Bank Holiday surprise when my daughter and son-in-law arrived for a cup of tea and a biscuit or two! They were out "for a drive" following a book of "Afternoon Drives" published, I would think, in about the 1930's. Thad had enormous fun trying to follow the instructions (no map, of course) along roads that had changed. The M6 has rather spoiled our country, cutting it in half, but there are still some lovely places around.

The weather was lovely, sun nearly all the time, so all in all we had a very good Easter holiday! Not forgetting, of course, the real reason for Easter - I went to a church I used to attend, (mainly because my present church has Victorian pews which make my 21st century back and legs agonising ) and I had a really good sing there and felt very thankful to the entire Holy Trinity 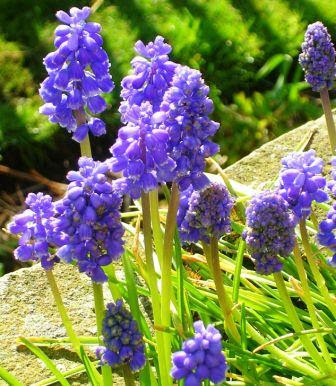 Thought I'd post something nice and cheerful! Having got myself thoroughly wound up over my appointment with the Consultant, it was cancelled at the last moment! Oh well, that is the NHS for you! I do have another appointment fixed, in five weeks time. As I am a naturally cheery person (my daughter might not agree with that!) I shall just have to jog merrily along and wait.

But we are not waiting for Spring any longer, it has burst out with a vengeance here, and everything is either blooming or bursting with life. It really makes me more energised just to see the big fat buds on the trees, even if there is a nasty cold wind whipping round my neck! 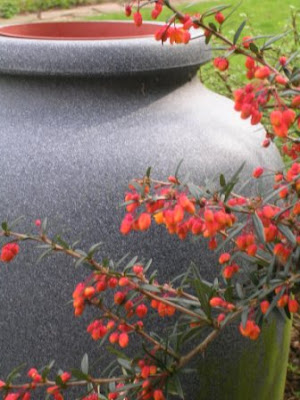 Its so easy to see that God is good in times like these. But I have to hang on to the fact he is with us at all times. Sometimes we hang our heads in misery and gloom, and cannot see him.

In the woods where I walked as a child

In the woods where I walked as a child
there was a magical glade,
with pines and grass and ferns,
where we picked wild strawberries,
and carried them carefully home for tea.

In the woods where I walked as a child,
there were enormous expanses of rhododendrons,
where we hid, and made dens,
and played tracking and "Germans" with our friends.

In the woods where I walked as a child,
there was a huge pond,
full of wiggles and darts and frogspawn,
which we netted and took home in jam jars.

In the woods where I walked as a child,
there was a horrible, spooky path
which led to a shack and a surly man
and two fierce dogs on a chain.
We never went down there.

I went back to the woods where I walked long ago.
There were houses and roads on the strawberry glade,
and I couldn't find the pond.
Rhododendrons still bloomed, but no children played.
Were they all at home, and forbidden to roam
alone in the woods? 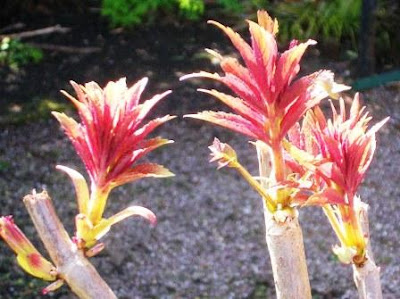 These rather strange-looking brushes are actually the bursting buds of a lovely golden elder we have. We cut it down every year, and each spring these little red brushes sprout, and rapidly turn into the most glorious yellow leaves. 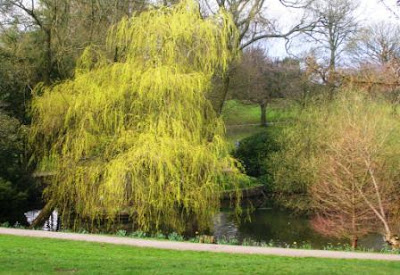 And speaking of yellow leaves, this willow trees coming into leaf looks more yellow than green in the afternoon sun!

Having had my eyes photographed, at a far-distant hospital and after a very long wait, I have now been telephoned by the Hospital with an appointment to see the Consultant next week. Of course, my mind is now thinking of all sorts of dire situations: why do they want to see me so soon? Am I going blind? Will I have to have an operation? HELP!

Better go and do something really useful, like cook the dinner!
Posted by Gilly at 17:08 6 comments: