I'm really pleased to say that the swans who came to the lake in our Park have stayed now for well over a year, maybe longer. I find time flies rather quickly now! 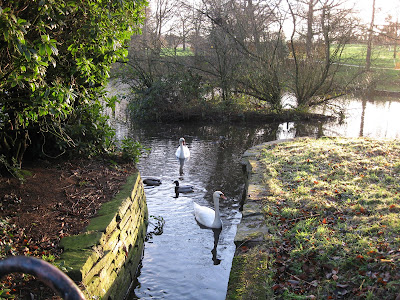 Yesterday the were hanging around where the stream enters the lake. We have had torrential rain lately, and the stream has been at its height, obviously bringing down goodies for ducks and swans! 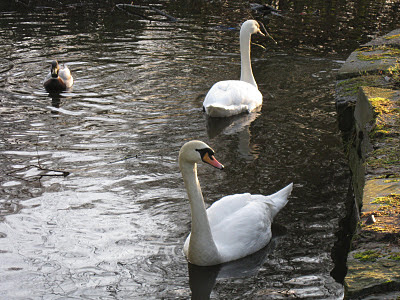 They are nearly always together, and we are hoping they might be a pair. Young swans do not breed for 3 or 4 years after they become adult, so perhaps these two are just waiting for their really adult years to appear!

We did have a very large numbers of Canada geese on the lake, but they have gone off somewhere else now, and gulls, mostly black headed gulls, sit waiting on the lake now until someone appears with food, and then fly around screeching, and trying to get the bread from under the ducks' beaks!

If it gets colder, with snow, then the geese will come back, the gulls will stay, and the number of mallard ducks increase. Then it will be everyone for themselves when food appears!
Posted by Gilly at 10:28

I may have mentioned it before, but one of the things I like about winter where I live is that the number of swans and ducks increase with all the flocks who come to visit from up north. I hope your pair do mate and are successful with raising a cygnet or two - that is exciting!

Oh your the one is so very touching...and I too have been in that same spot, exactly, different doggie, another name and I swore the same vow to her...but we do have amazing hearts, and they are forever stretched by those we love....over and over...

These look very settled in - I hope you do get baby cygnets. xxxx

I would think the snow would drive them away to warmer climes. It surprises me that the swans stay, the gulls come and the ducks grow in number. Don't they know about Portugal?

They are so beautiful! The last time I saw some, it was in Zurich.