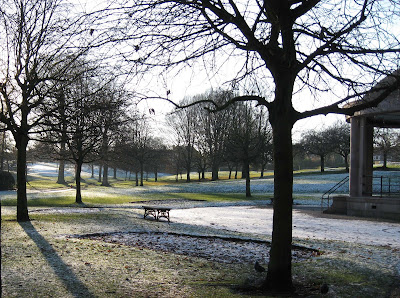 We haven't, thank goodness, had all the snow here that the eastern half of the British Isles has had. But it is still bitterly cold, everything is frozen solid, and although there is a lot of sun (or there was today!) it is not strong enough to make anything feel warmer.

Late afternoon in the Park looks rather chilly, I thought. 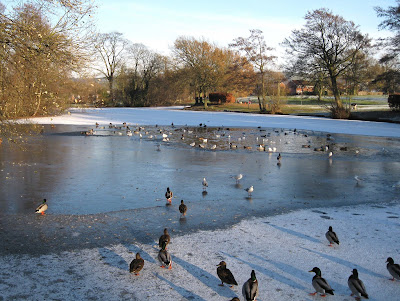 The ducks and gulls on the lake have only a fairly small area which is not frozen. This is where the deepest part of the lake is, and usually, however, cold the winter gets, a bit remains unfrozen. 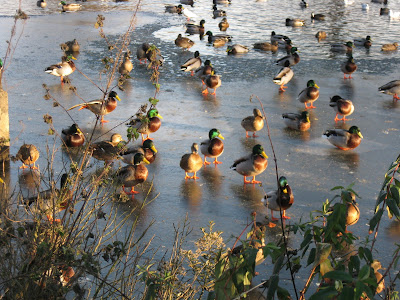 There seems to be an unusually large number of ducks here, plus the wintering gulls, but the Canada Geese have gone elsewhere. The ducks know that they will be fed with an enormous amount of bread as all the small children come here to feed them. Their little red legs looked so cold on the snow!

It is very early for winter to start here, and I for one am feeling I am too old for all this!!

BRRRRR...we moved from Ohio to North Carolina so we wouldn't have to tolerate and endure the cold as much. Although very lovely, the pictures even seem to throw off the cold.
Stay warm and cozy up in that blanket! Thank you for sharing!

You have it much colder than we in Ontario are (at the moment)!
I do love to see the duck skating ont he ice, though. It can be very comical.

Oh Gilly, they do look so cold -- and it is so early. Perhaps things will warm up soon.

Those pictures do look cold. We've had a couple of nights that were down to freezing, but at least the days warm up nicely. I do not like cold weather.