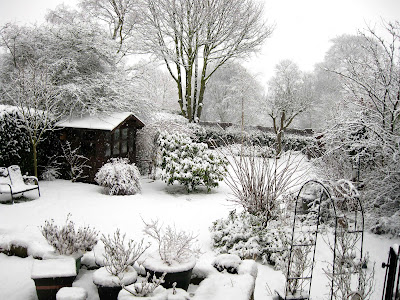 We had a lot of snow on Friday and Saturday, which made the garden look really pretty! I'm a bit of a sucker for pretty snow, even though it makes it hard to travel about|! 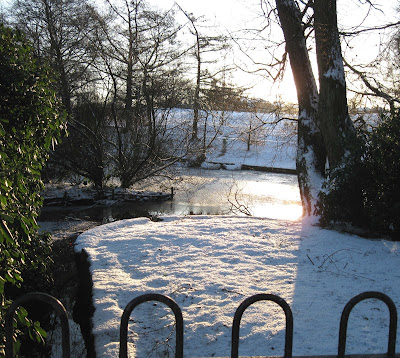 Where the little stream enters the lake is not frozen, and ducks tend to huddle around that bit. But the early sun looked so lovely shining over the ice. 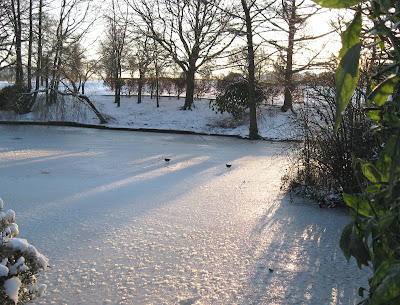 The lake is nearly frozen right over. There is a very small bit of open water where the ducks sit waiting hopefully for the army of duck-feeders arrive later in the day. But the moorhens don't seem to mind. 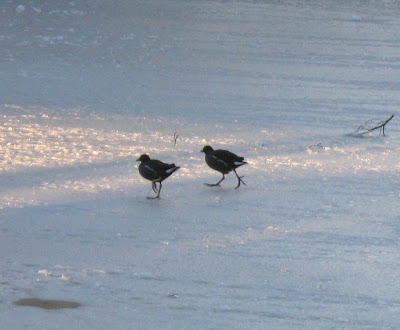 And they leg it briskly across the ice! 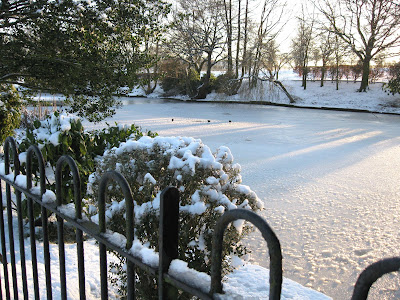 You can just see the open water here. 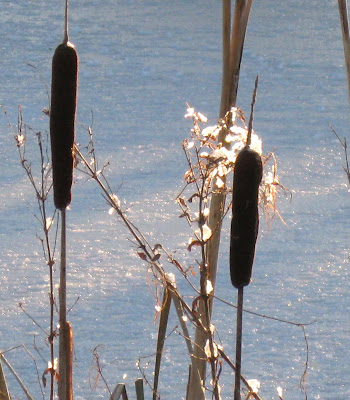 The bullrushes looked so striking against the light. They weren't quite so good this year, so I had to make the best of what there was! 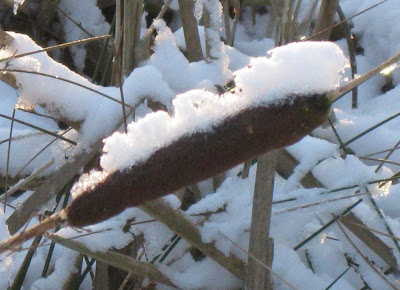 The snow was so heavy, and then turned to ice so that a lot of things were bent down.

I was going to walk round to the other side of the lake, which I haven't done for ages, but the dog had other ideas and raced down the path around the tennis courts. Rather a dull walk for me, but I suppose its heaven for dogs with lots of interesting sniffs!

But maybe I'll get there tomorrow, or even this afternoon if I can find the extra strength! Mind you, it gets a bit dangerous round there with speeding and out of control sledges! But its great to see the children (and adults) enjoying themselves - we don't often get snow like this!
Posted by Gilly at 10:51

I'm a sucker for pretty snow too :)
Just beautiful Pictures

Beautiful photos! Be careful walking on those slick surfaces!

Your snow is so pretty! We're just cold - no snow.

Nice seeing the snow from my spot on the beach...really wonderful.

The snow is so pretty decorating your backyard. You caught one bird in midstride and I imagined it saying to it's mate--'do I have to put my feet all the way down on this cold icy stuff?' Love the scenes you have captured.

What a winter wonderland. My husband has spend 10 days in the minus 10, but also in the white beauty and he had a white christmas
Gilly I wish you all the best for 2010 Happy New Year

Just popped over from Imagine to check out your blog. I love the photos.

We live in the UK, near London, and although the weather is really cold, at the moment all we have is a heavy frost.

My kids go back to school tomorrow, so I hope it stays that way too!

Lovely to see photos of the snow. We didn't get snow until this afternoon. I'm hoping that it will still be there tomorrow so that I can get some photos.

A Happy New Year to you and your family!

I'm telling you, you're getting the same exact weather we've been getting! It IS pretty, isn't it? Love the pictures of the bullrushes. Didn't know that's what they're called. Be careful walking on the slippery stuff!

There is a magical feel to freshly fallen snow. Your photos are beautiful Gilly. We had a snowfall the other day.....big wet lashes fell from the sky and cloaked the trees. the branches were laden down. It was stunning while it lasted because as quickly as it it came, it turned into freezing rain and then rain and the beauty turned into a big slushy mess. Today? It was so beautiful and sunny.... warm enough that I didn't have to wear a big coat, hats and mittens! I'm sure this weather won't last.....snow and colder temps are in the forecast.

These are stunningly beautiful! A great contribution to our latest Thematic theme, too!

I always enjoy how you choose to view your world. You clearly inherited the gift of photographic composition, because every picture you take seems to tell a story.