AROUND BRITAIN IN SEVEN EASY STAGES

At last I can get down to a new blog - if I still have any faithful followers!   I don't deserve you, really I don't!

We have just come back from a cruise round the British Isles - in the company of a great many Americans, a large contingent from Japan and Korea and a good sprinkling of other nationalities.   And this was the biggest ship I have ever been on!   Don't think I would go again on such a big ship, but the cruise was great.

We left Southampton and headed for Guernsey, which was lovely, and full of bright sunshine. 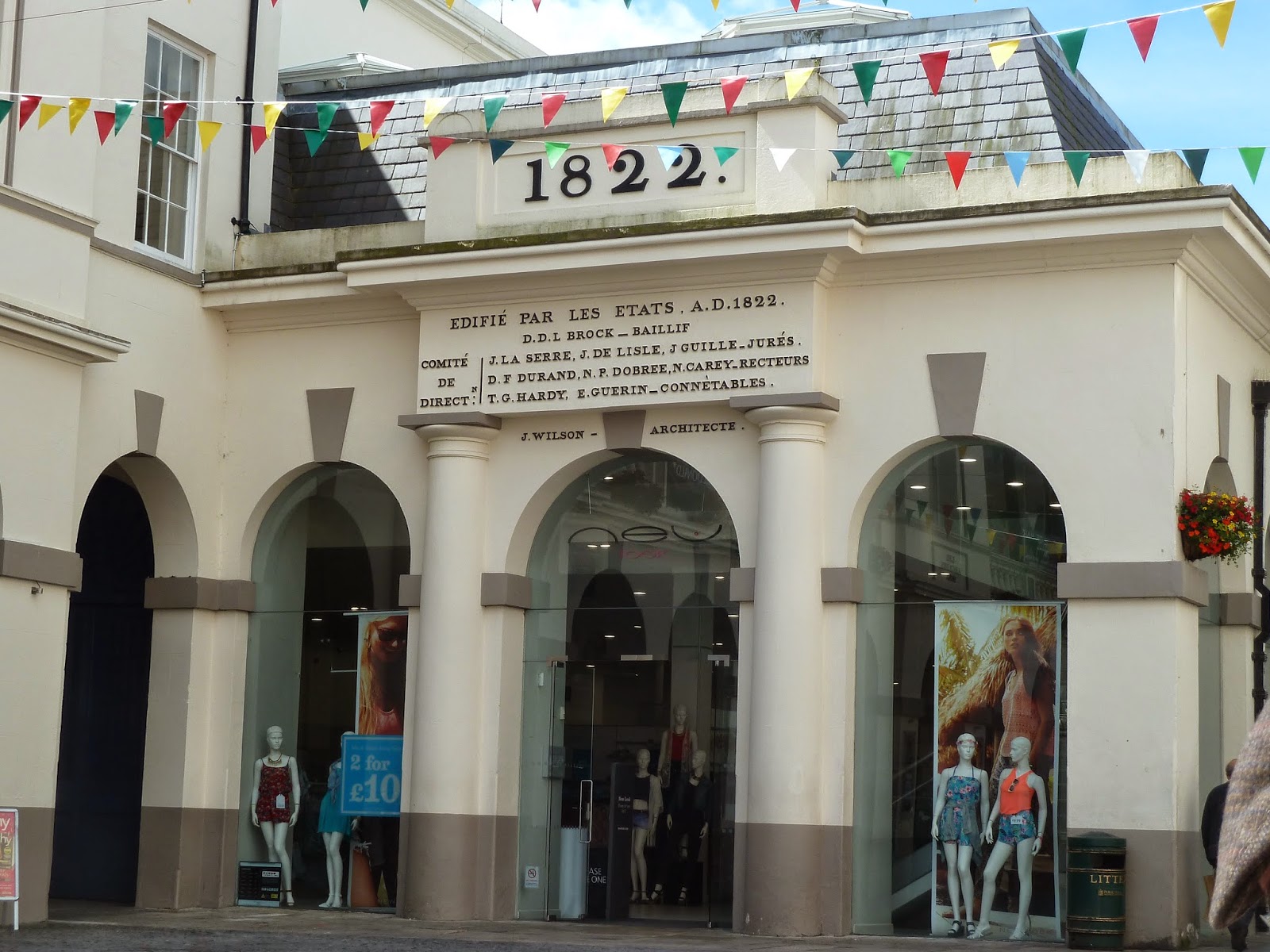 There is a big French influence in all the channel Islands.   Many street names are French 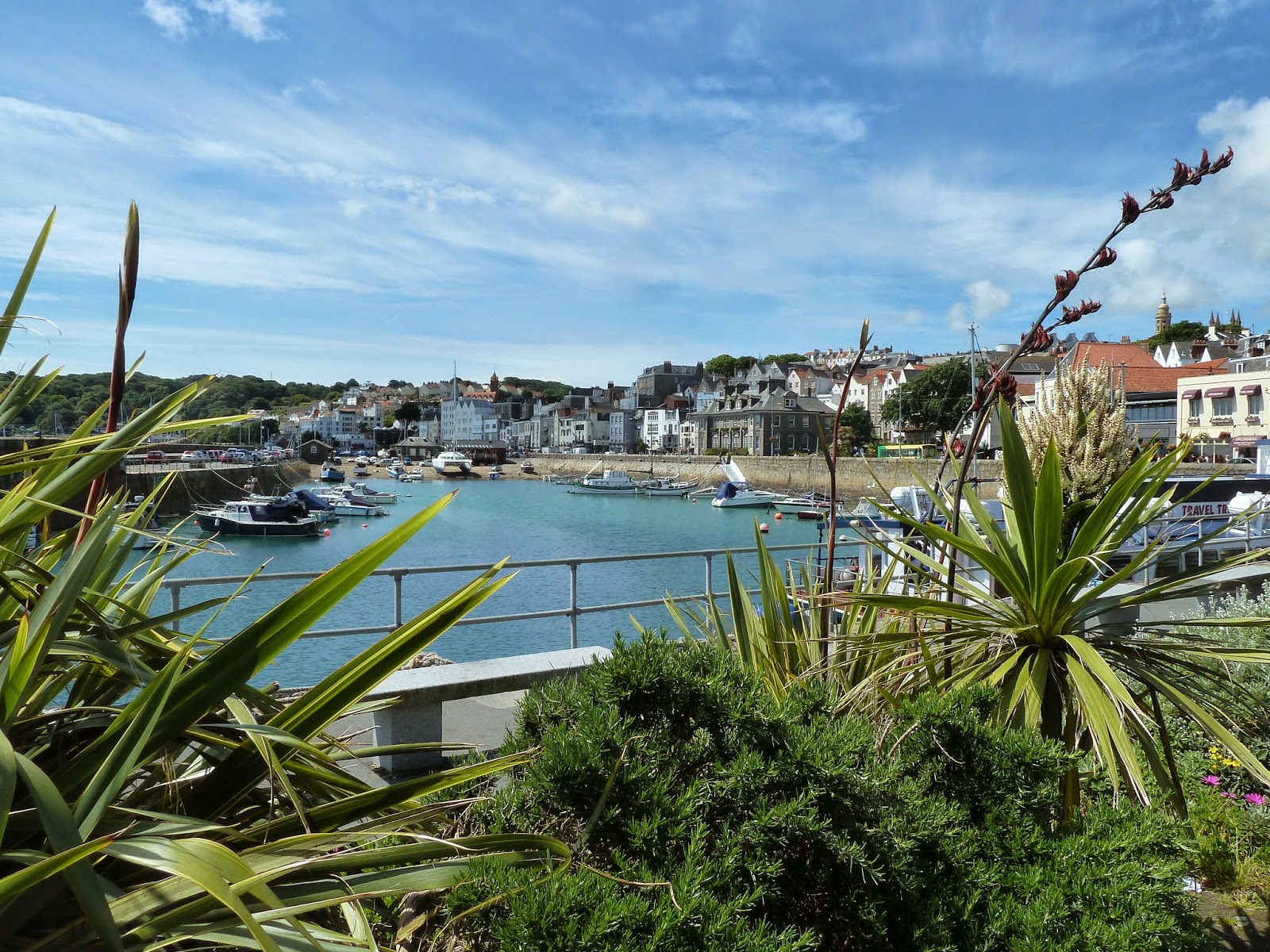 Guernsey has a beautiful harbour.   Very popular with sailors of small ships!

Leaving there we went off to Ireland, and berthed at Cobh.   From there we rejected any excursions provided by the Cruise Company, as without exception, they were horrendously expensive.   We therefore took the train to Cork.   I am sure Cork is a lovely city, but unfortunately it was very wet!    A little mooch around, and then we took the train back to Cobh and our ship. 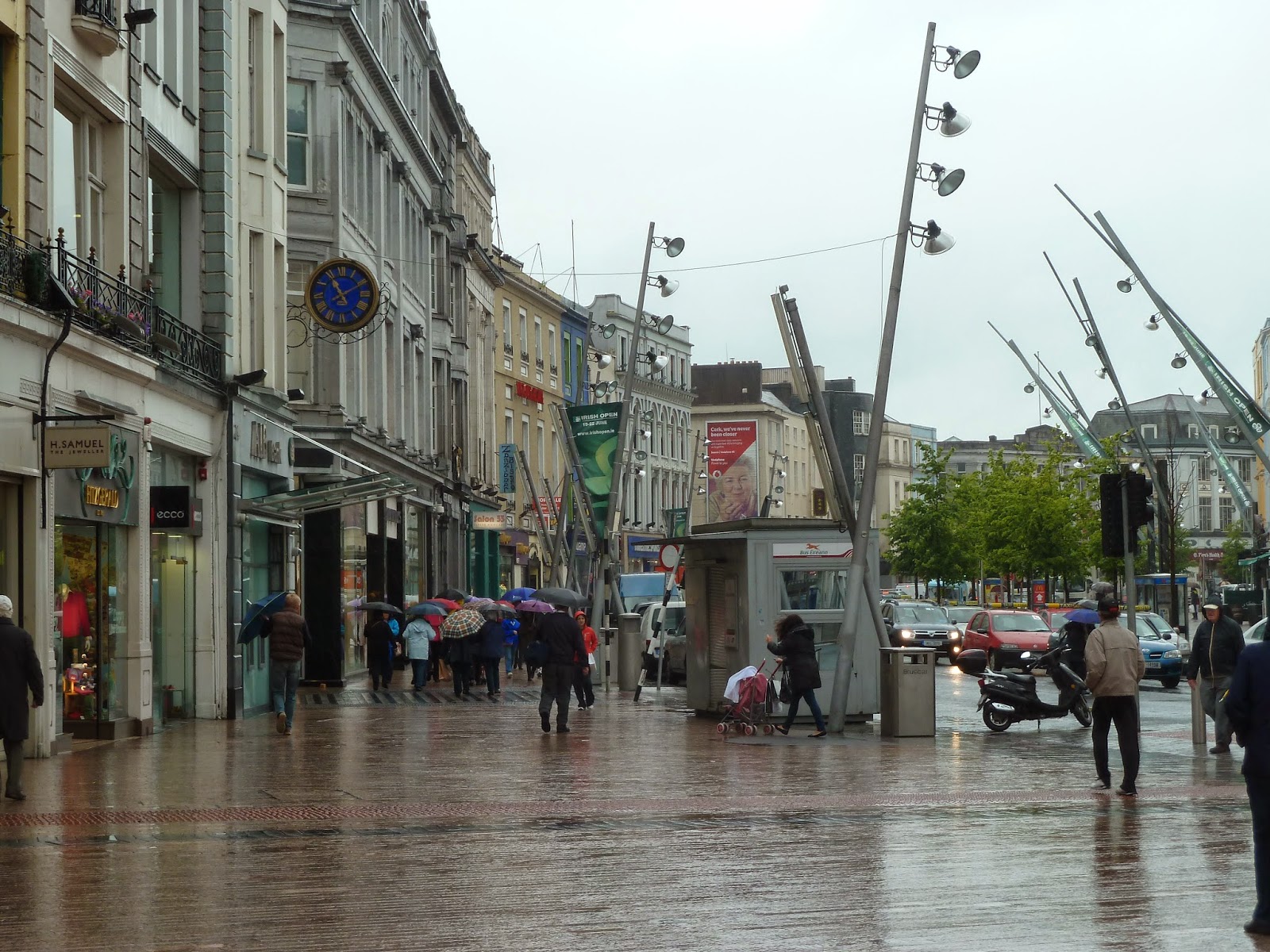 Cork was very wet.   And had unusual street lighting 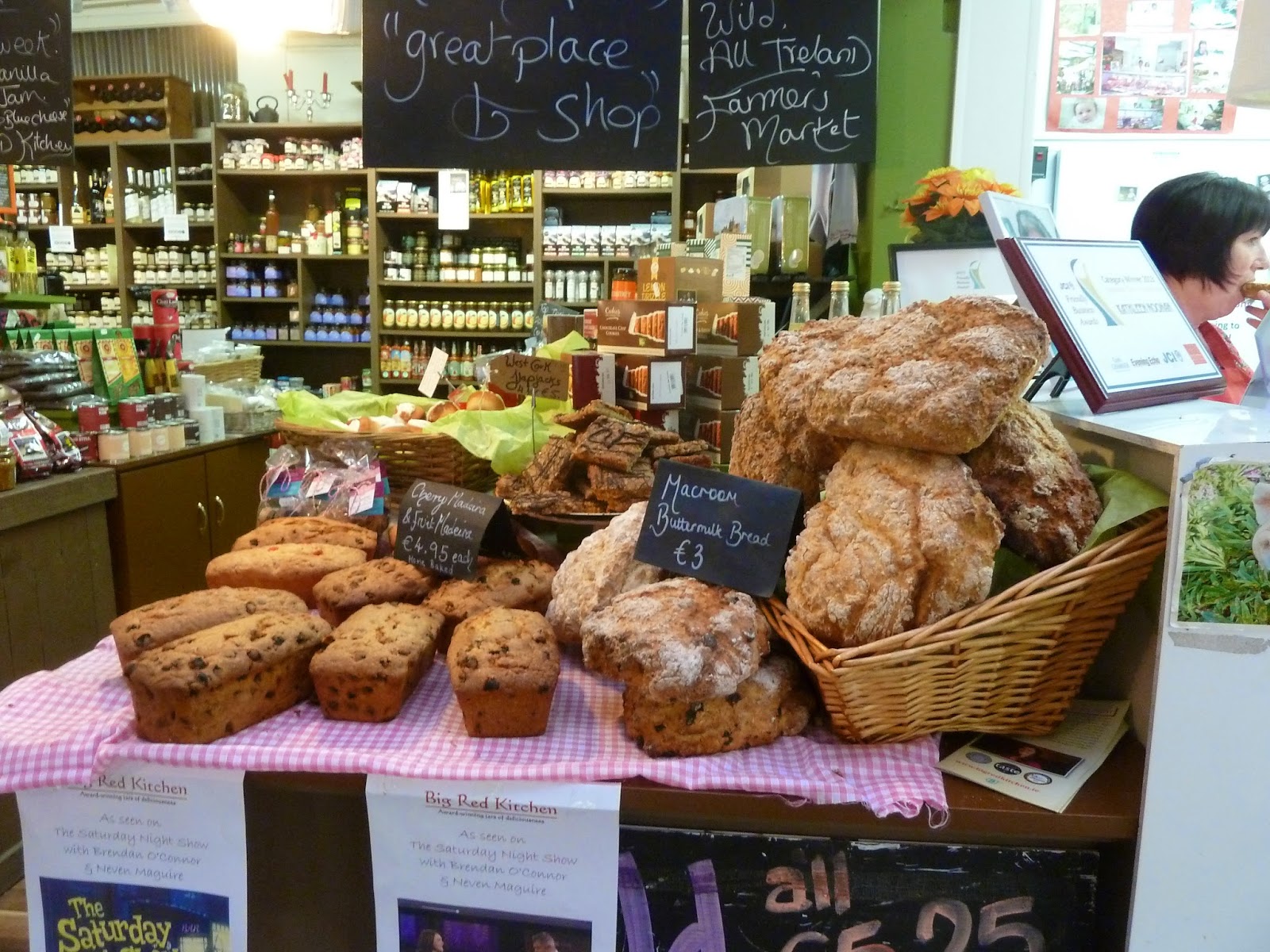 But it has a great indoor market, selling all sorts of goodies, which I would love to have bought and taken home.   But alas, they would never have stood being stored on the ship for another week! 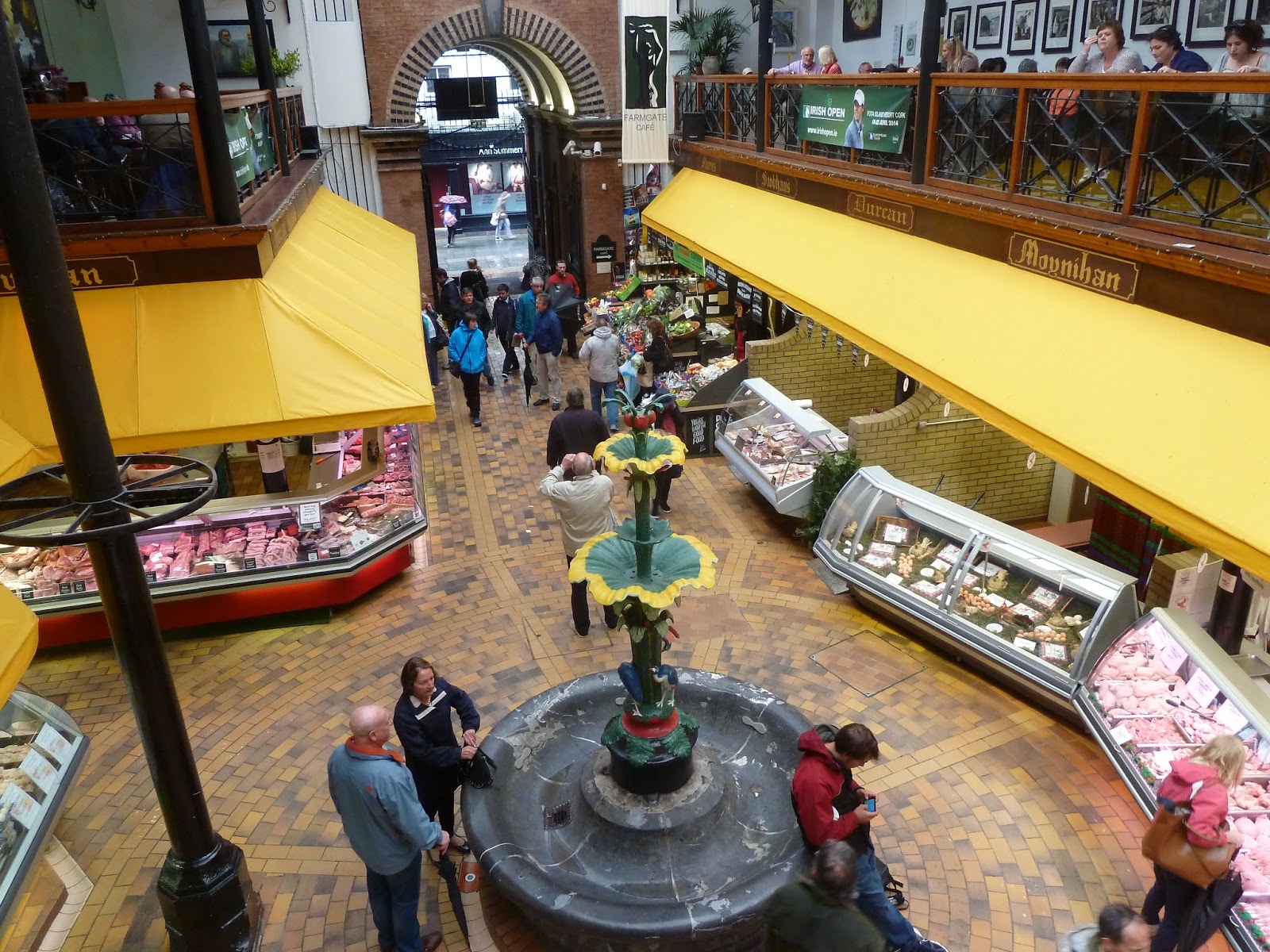 Up on a balcony floor there were a couple of cafes, where you could have lunch and look down on the shoppers. 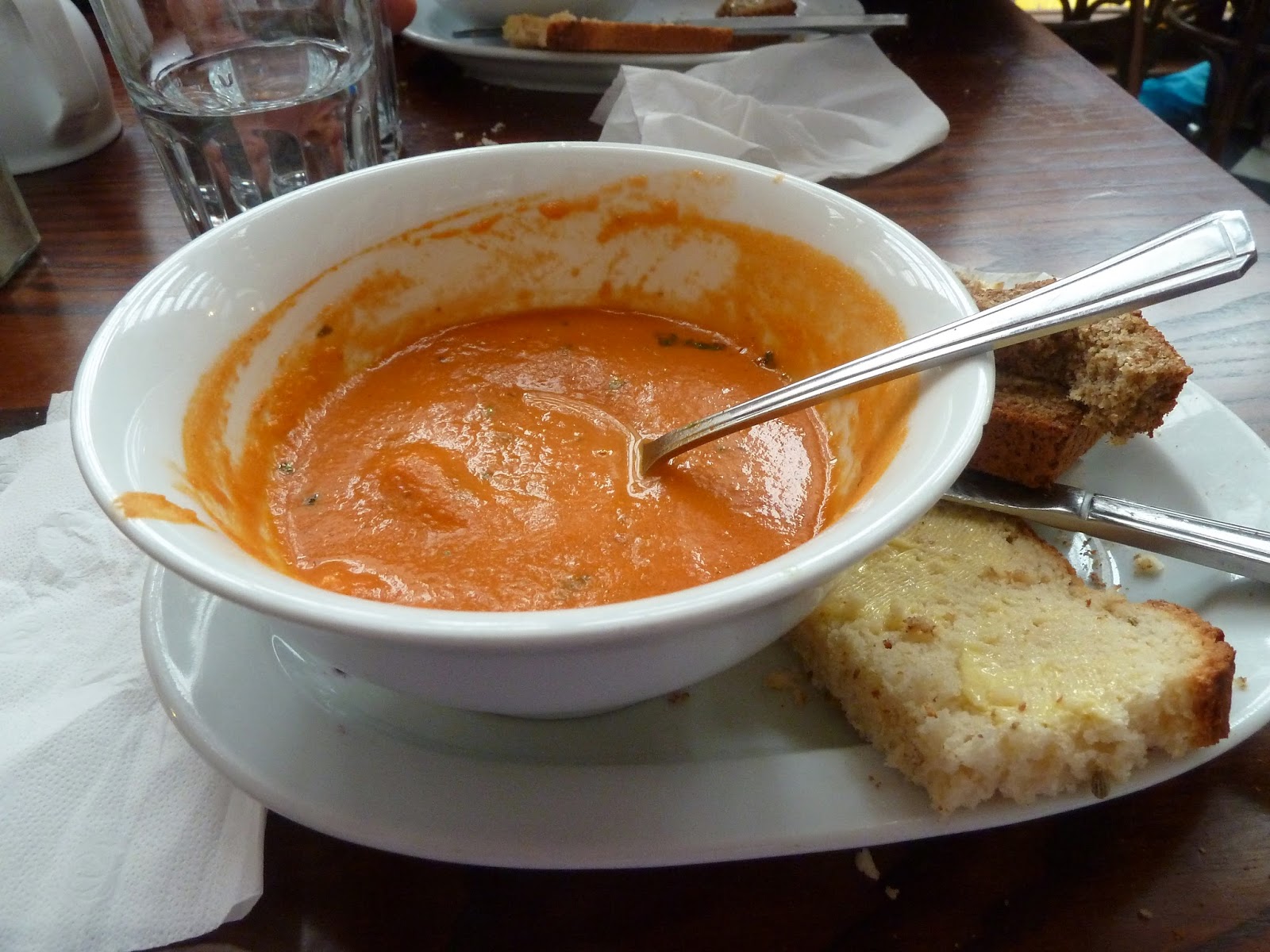 Thick home-made tomato soup and soda bread strengthened us for the afternoon!

From Cork we sailed for Dublin.   Now Dublin is a beautiful city, and was not wet!   We found an open-topped bus to take a tour of the city, seeing all the sights this way (which is great for me, as walking is not too good). 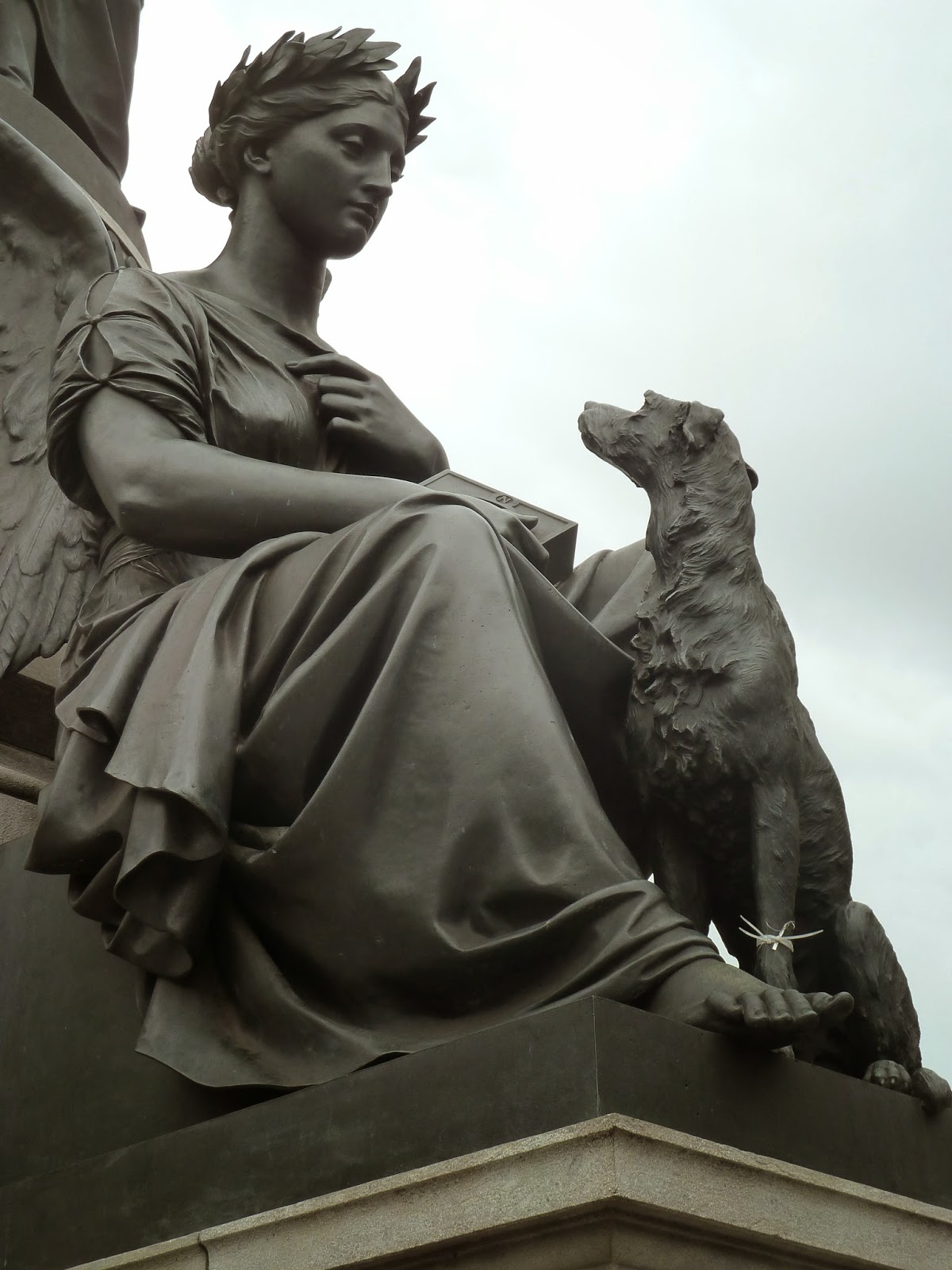 I loved this statue of the woman and her dog.   I have no idea who she was! 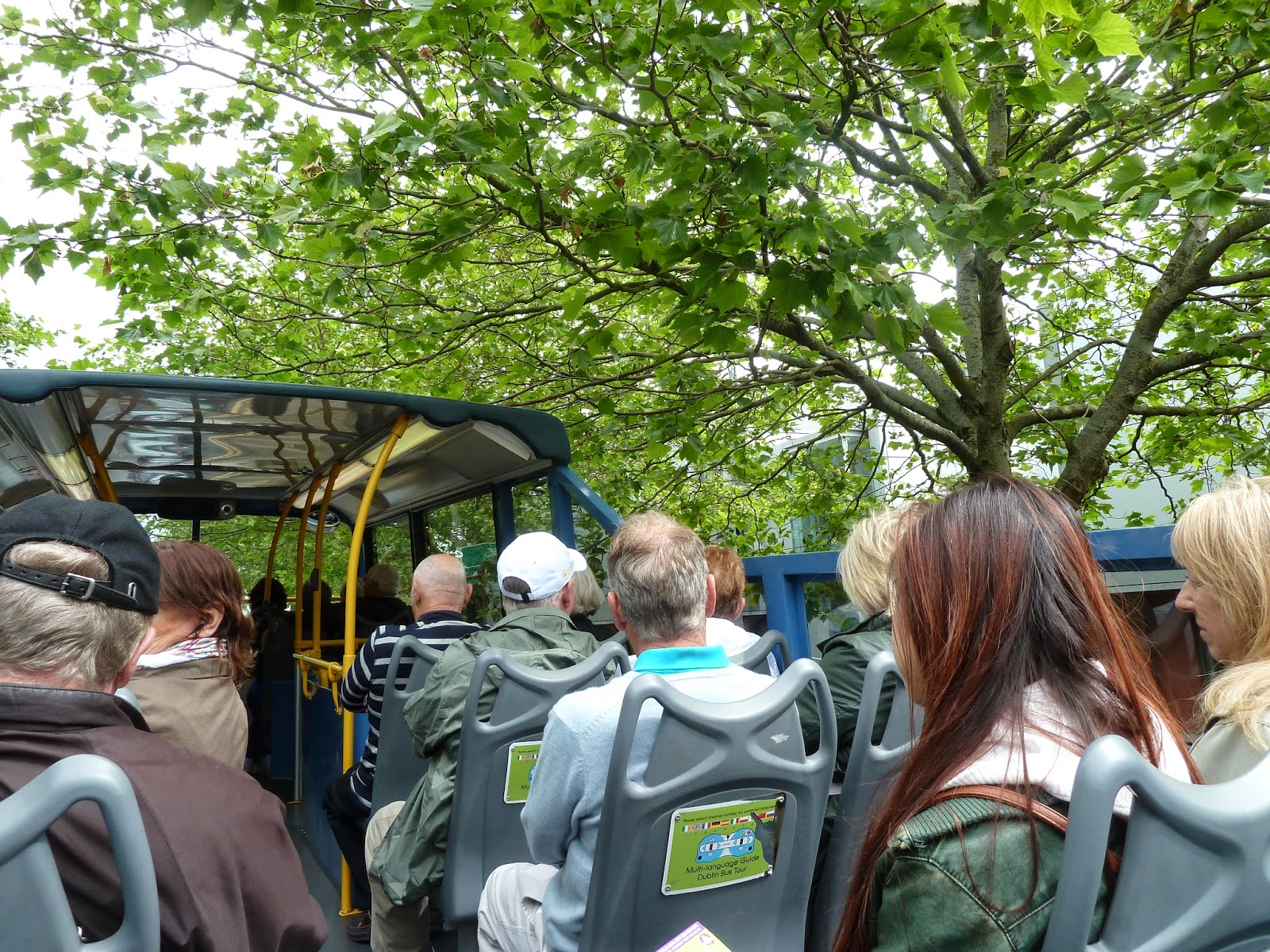 Because we were on an open topped bus seeing the sights! 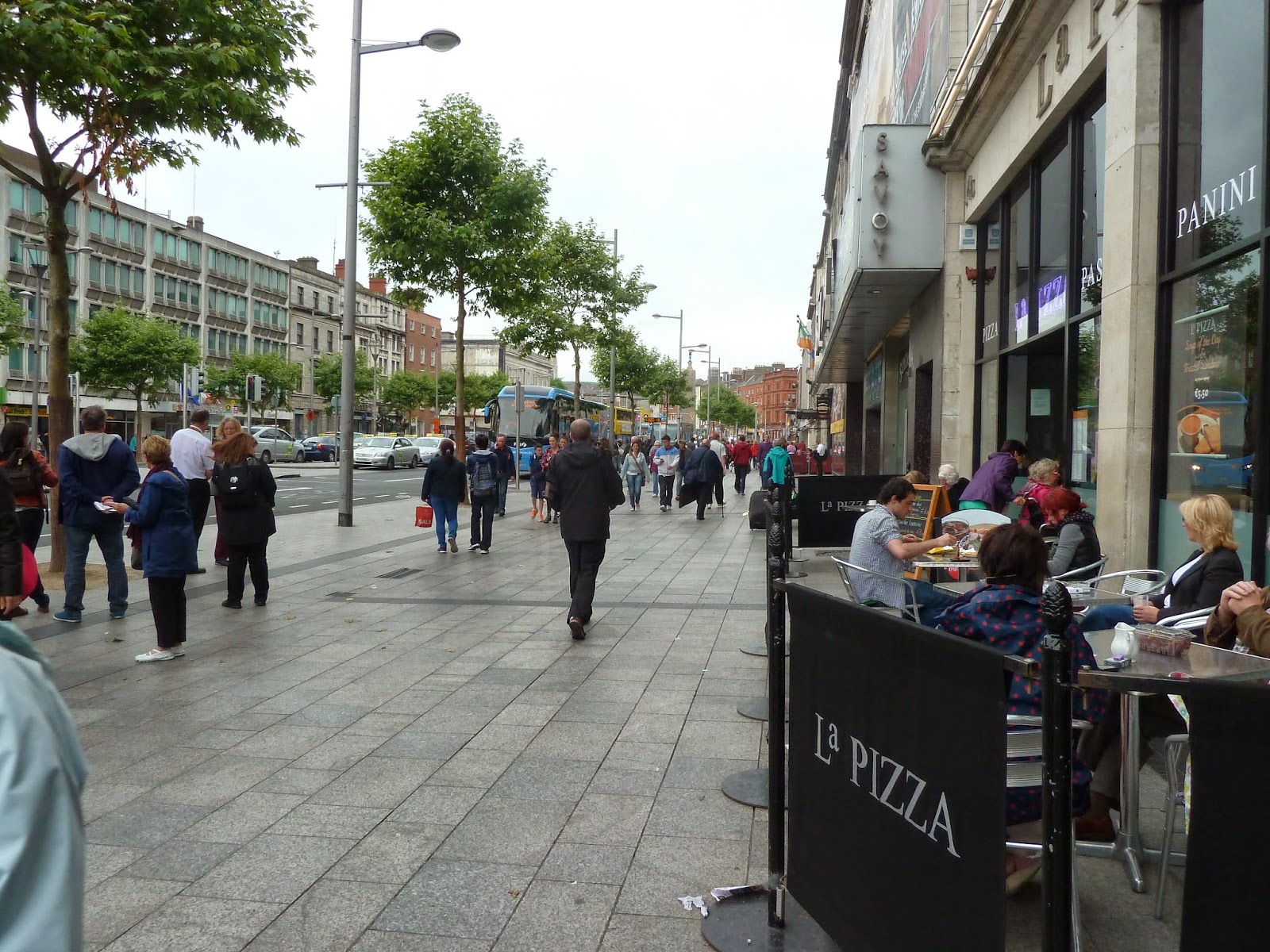 We walked down the famous O'Connell Street, scene of big riots in the 60's

From there we sailed up to Belfast ( change of currency back from Euros.   I think the Americans got a big confused).   It was a Sunday, and I had thought there might not be much to see on a Sunday, so we did take an excursion, which took us round the Antrim coast to a pretty seaside village, stopped at a Cafe in a Forest Park.   Poor souls, they were overwhelmed with two big 60-seater coaches all coming in at the same time for free tea/coffee and a scone with cream and jam!   But I think most people got their very big scone and tea and we set off back to the ship. 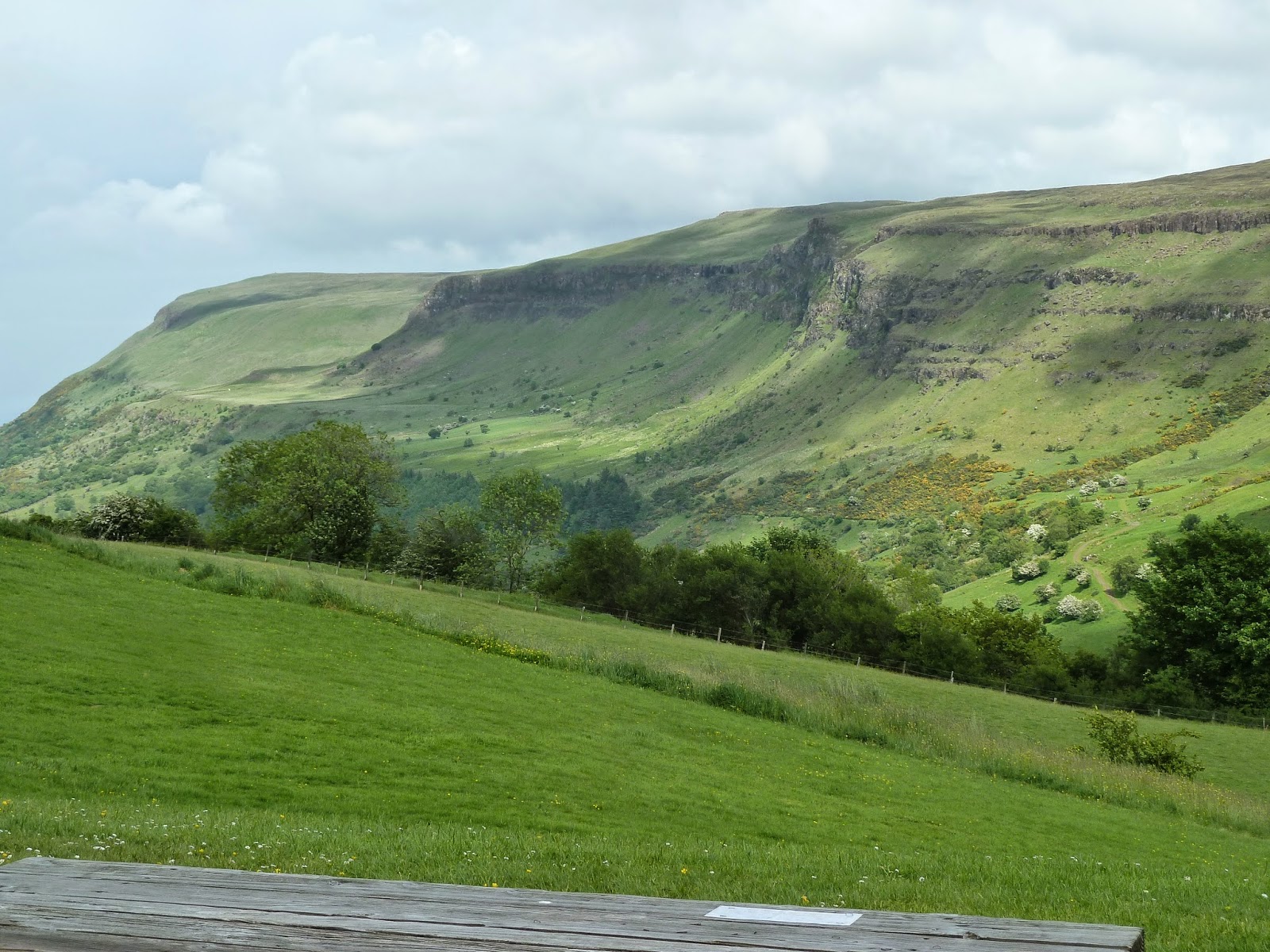 Some really lovely scenery from the Forest Park.

The next day we berthed at Greenock, which was advertised as "for Glasgow".   Glasgow was a 40-minute journey away, and not all that easy to get to unless you went with the excursion.   Of course, we did no such thing, and went round the coast to Gourock by bus, and then took a ferry ride for 20 minutes to Dunoon, a little seaside town on the River Clyde.   Dunoon had, I think, seen better days, but we pottered round the shops, had an exceptionally nice lunch in some tea rooms, and then ferried back to Gourock, Greenock and the ship. 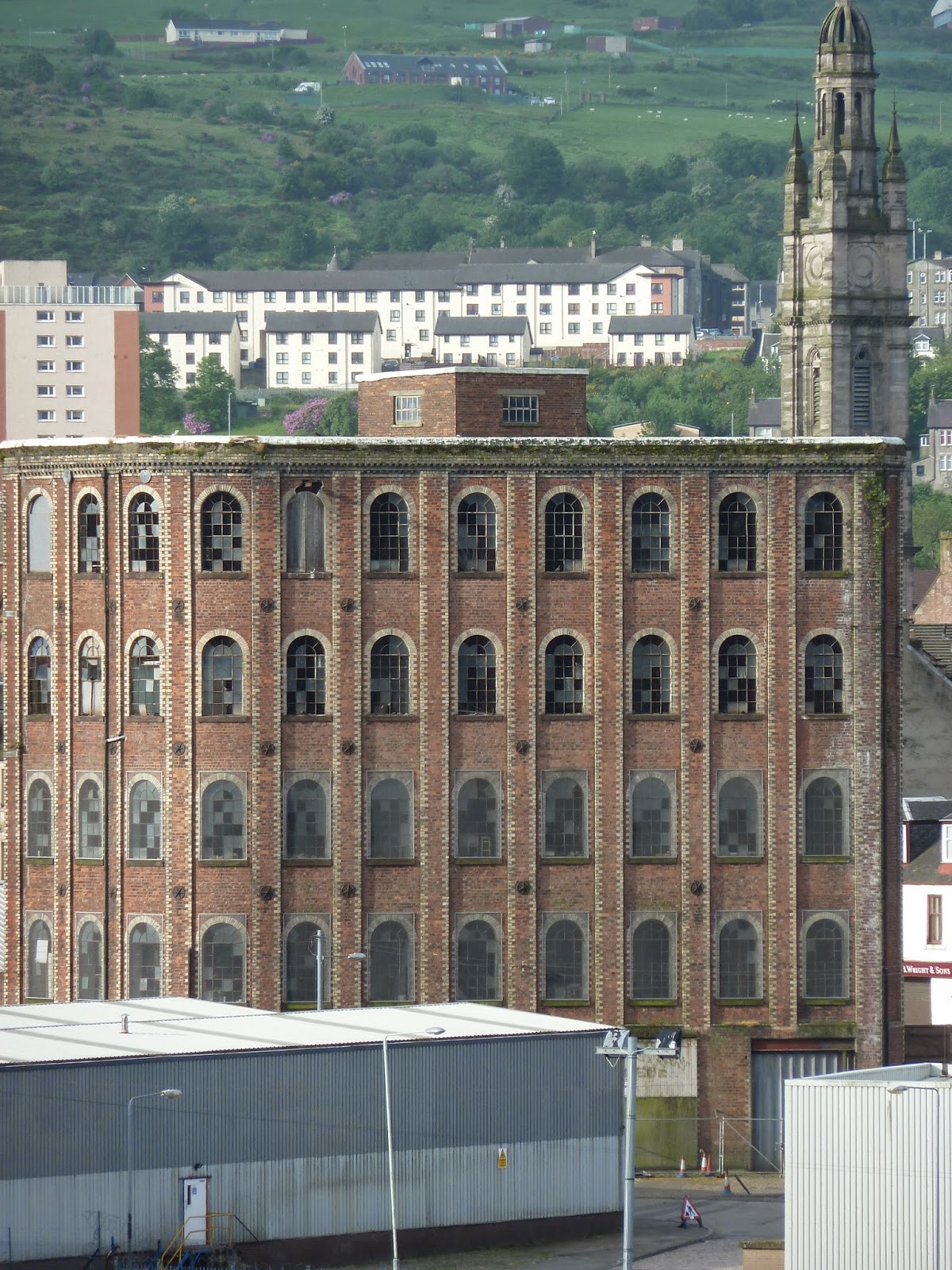 Greenock had some interesting old buildings.   This had been a sugar warehouse. 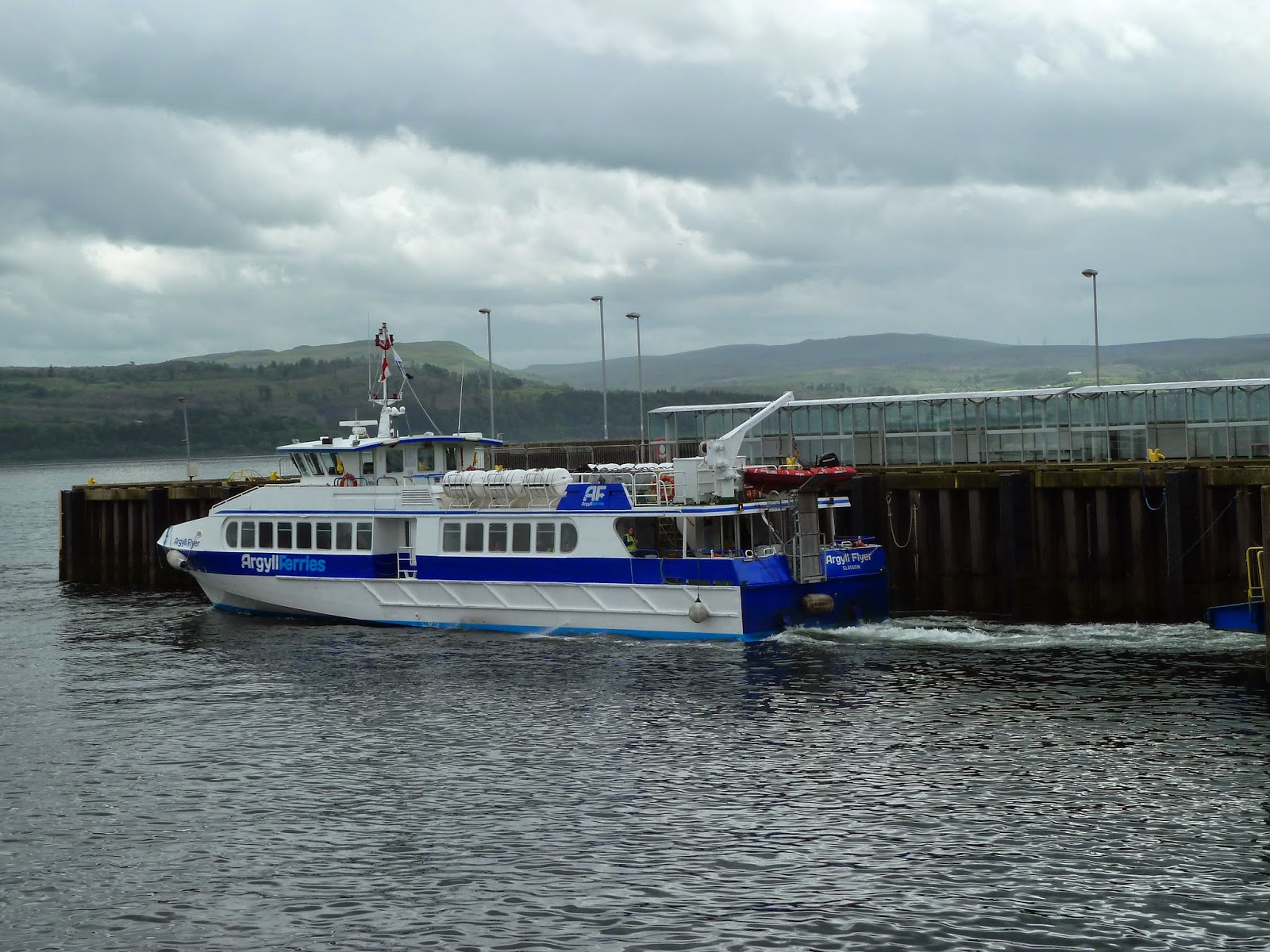 The ferry looks small, but took a very large number of foot passengers very comfortably across the Clyde. 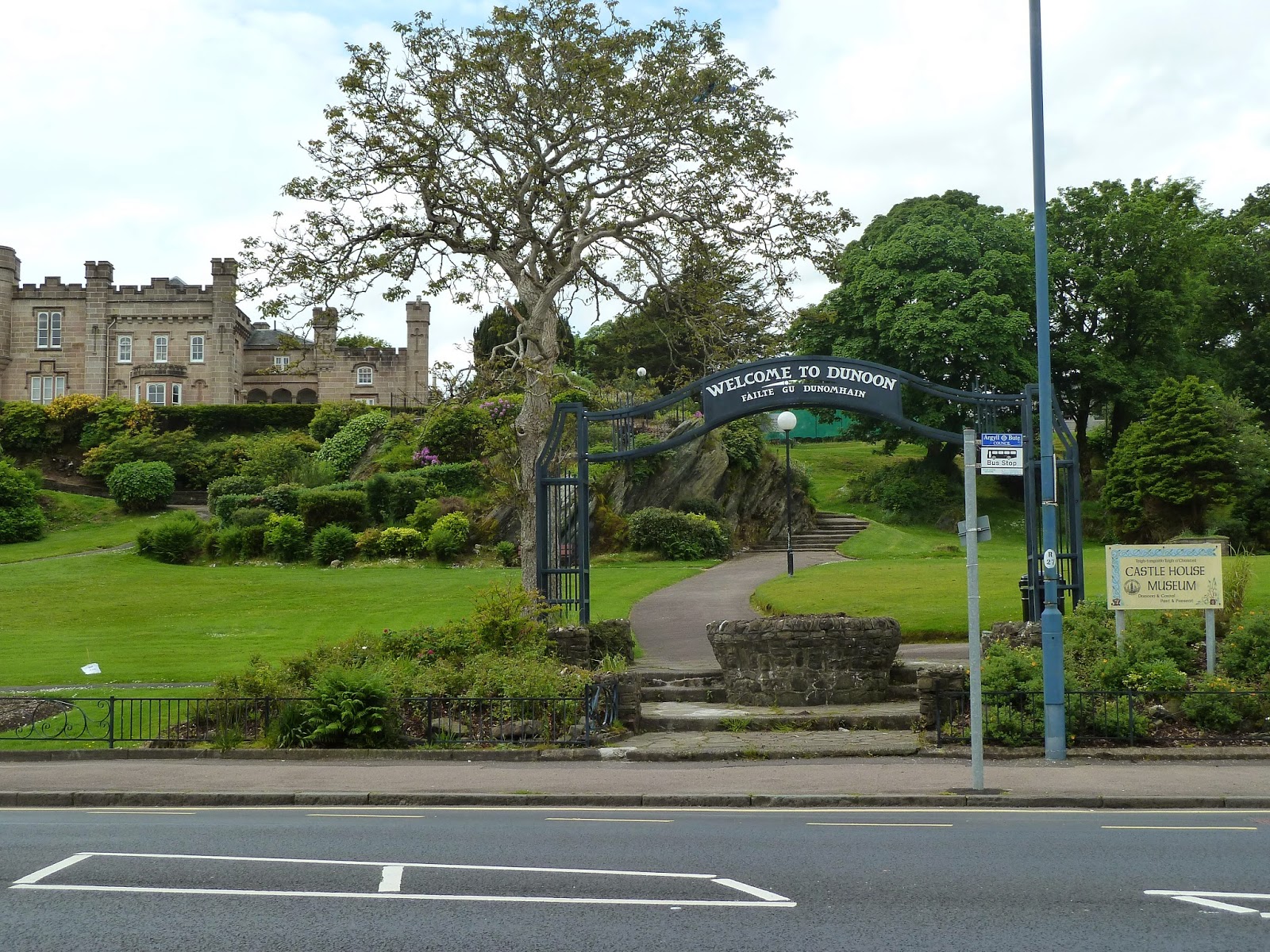 Dunoon was very welcoming, and had some very interesting spots and corners! 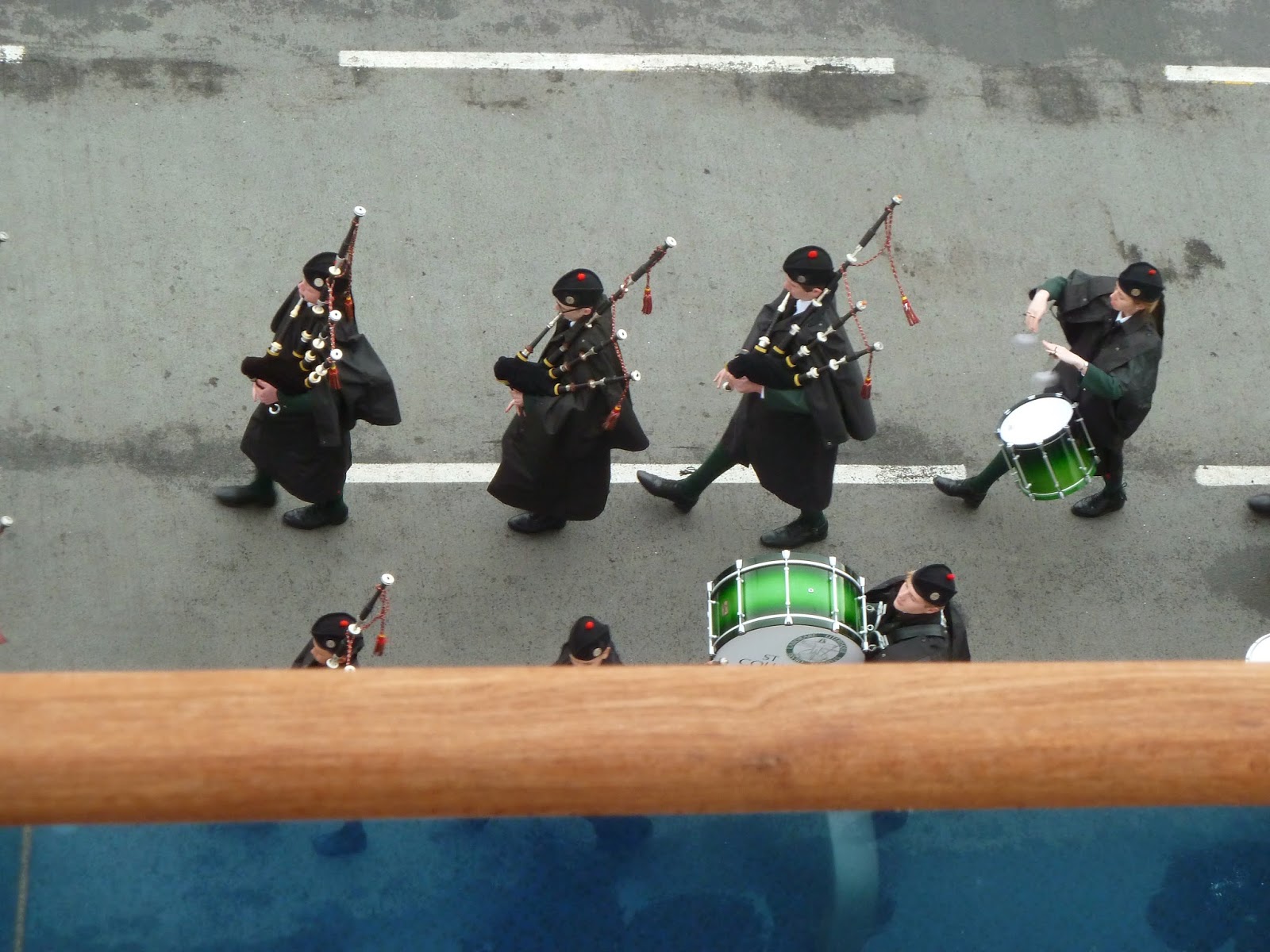 At every Scottish Port we were welcomed in the morning (rather early) by a piper, and then "piped away" as we left.   Some towns even produced marching bands.   I'm afraid bagpipes are not my favurite instrument!

By this time we had travelled all the way up the west coast of the British Isles, taken lots of photographs, seen some great places, and enjoyed ourselves.   I'll leave the North and East coasts for my next blog!
Posted by Gilly at 11:58

You had better weather than your last cruise if I remember rightly! IIt all looks lovely. I love the Channel Islands and Guernsey is the sweetest. It's an interesting way to go around the UK! Can't wait to see the next leg xx

How fun! You go to the best places, and share fun photos so it's we were there too! I like that woman and her dog too! It looks like you had a very full trip! Carmi has his new Thematic Photographic up this week. He picked summer as the theme and you have some great photos to share I know!

Hi Gilly, Just to let you know that the only animals in the circus are their own horses and a couple of rescue dogs that belong to the family too. It's all acrobats , jugglers and comedy xxxx

All looks fab, Gilly, in spite of some rain. I haven't made it to Ireland yet... Lesley x

I happened to see a comment you made on JustAskJudy and wondered, "could this be the Gilly" I used to follow? So, I followed the link and sure enough, there was your smiling face and two blog links. Loved your posts and your wonderful photography and will enjoy keeping up with you again. Not really sure how I lost you in the first place. So envious of your travel.

What wonderful photos and memories. I'd love to do something similar, but mr. kenju is unsteady on dry land; I can't imagine how he would be able to walk on a ship.

Thanks for the visit and nice comments on our 50th. I can assure you that I cannot wear that dress again (maybe on one leg.)

My ancestors are from Cork!

Don't apologize for not blogging regularly. I don't think any of us are blogging like we used to. Plus, obviously you are quite busy running around the world!

If your Binance two-factor authentication is not working, then you should get it checked as soon as possible. Binance two-factor authentication helps in supporting your Binance account from troubles and even provide an extra layer to protect your account. To deal with these errors, you can always call on Binance customer support number which is functional all the time for guidance. You can have conversation with the team anytime for providing quality results. Connect with the team for impeccable solutions.