Today (Sunday) was the monthly Treacle Market in our Market Square and adjoining street. Sadly, the "real" antiques seem to have disappeared, but there are still a lot of stalls to search 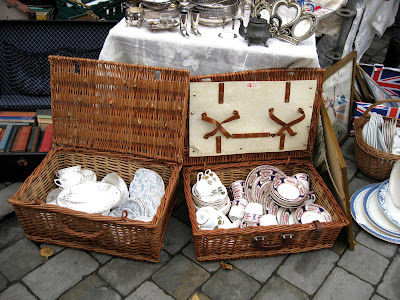 there was a lot of pretty crockery on this stall, but I wondered if anyone ever used the traditional wicker hamper for picnics? They must have been terribly heavy - you wouldn't have wanted to carry them too far! 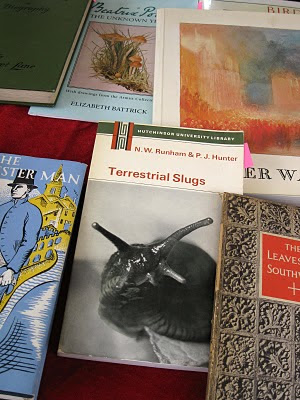 There were a couple of bookstalls, and I was very pleased to find a book illustrated by Charles Tunnicliffe. I love his drawings, painting and all artwork of his, and the black and white illustrations in this book, which is devoted to country matters, are delightful. The book is written by HE Bates, another old favourite of mine. Sadly both Charles Tunnicliffe and HE Bates are dead now.

There was one book I didn't buy - though I did wonder if there were any other sort of slugs other than terrestrial ones! 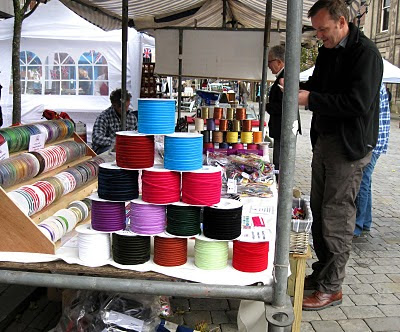 There was a stall with lovely coloured ribbons....... 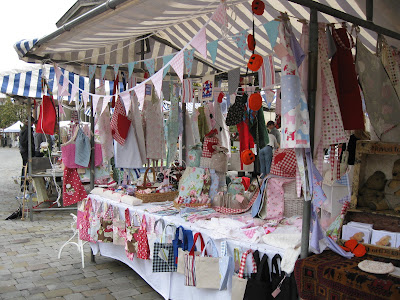 ........and one that was all sorts of bits and pieces. It actually was a very windy day, but you can't see it from the photographs. 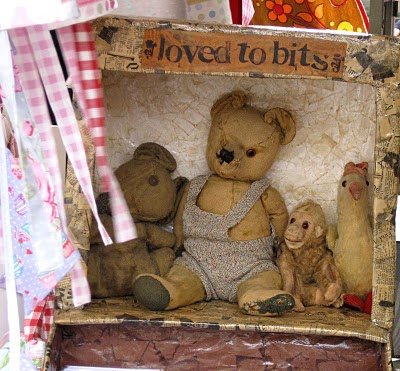 On the next door stall there were some old bears and other animals....... 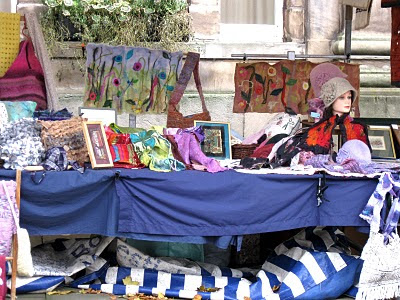 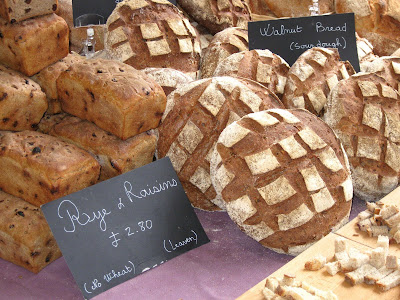 The food stalls were all together down a street leading off the Market Square. There were two bread stalls, both were loaded with really yummy-looking bread. I bought a loaf that I was promised was full of seeds and goodness! 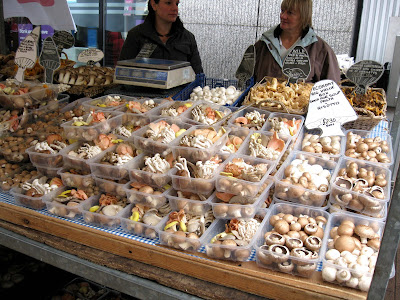 There was also a stall selling Fungi. This was a new one for the market, and although there were plenty of "ordinary" mushrooms, there were boxes of mixed fungi, which I really wouldn't have liked to try without positively identifying them first! And then I might err on the side of caution and not eat them! 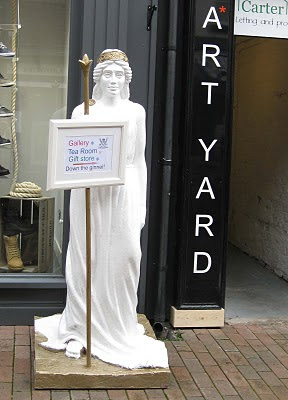 And lastly, in case you needed a sit down and a cup of tea or coffee, this maiden was there to direct you down the ginnel!
Posted by Gilly at 13:37

I love going to places like that! My mom had (and I now have) an old picnic basket from the early 50's that was fitted with solid color plastic dishes in chartreuse, burgundy and gray. It was heavy enough, so I can't imagine carrying one full of real china!

It looks like so much fun. The booth with bunting hanging was so festive--and the bread stall, oh, that was beautiful. But I have to admit that my greatest temptation would be all the English china, the transferware, the lovely lovely English stoneware. I am a huge Spode fan but it's not that accessible here. If I came over and bought it in England I would never be able to afford getting it home...so I guess I will have to move to England.

THank you for the tour!

Wonderful. The picnic hampers look beautiful - though a bit impractical. One would need a manservant to carry it!

I also love the bread stall. I love shopping at markets like that.

I'd love to go to that market and spend the day investigating all the different stalls. I think I could outfit a fungi stall with all the mushrooms in my yard. We've had lots of rain and they are popping up everywhere. I wouldn't dare try to eat any.

Hello Gilly! I follow your blog, but rarely make a comment. I've decided to try to make at least a short comment when I visit blogs. Maybe you'll pop over to see mine.

Your market looks much more interesting than ours! I think I would be very tempted by the bread stall - it looked fantastic! And I remember longing for a picnic hamper like those when we were first married - until I realised they were so full of crockery etc that you'd need another one for the food! I went off the idea after that! Though, as you say, if you had manservants to carry them, you wouldn't mind how many hampers you had!

I love your photos. Well done - they're miles better than mine!

I just picked two huge mushrooms from my lawn. About the size of softballs. Pure white. I bet they would taste delicious, but you know, all those stories you hear, I was scared just touching them! Ha!