CRUISE OF A LIFETIME !

We had the most fantastic holiday! Now of course, I've had to come down to earth, but I'm enjoying picking photos for a new blog! 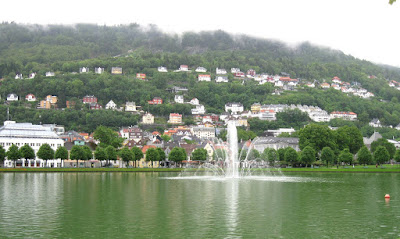 Our first port of call was Bergen, Norway. It is reputed to rain 360 days of the year in Bergen, and yes, we managed to pick a really wet one! However, we got around, well kitted out and more or less waterproof!

Bergen is a very pretty town, with a lot of history behind it. In the 18th Century it was one of the important ports in the Hanseatic League, trading fish, furs and other things across Europe. 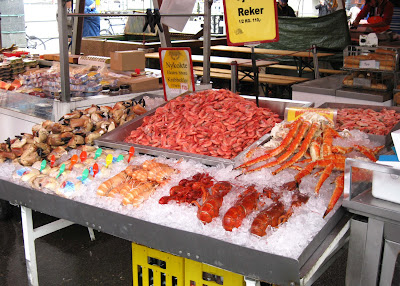 We found the Fish Market at the harbour, mostly specialising in shrimps, crabs and other shellfish, plus cod and haddock. 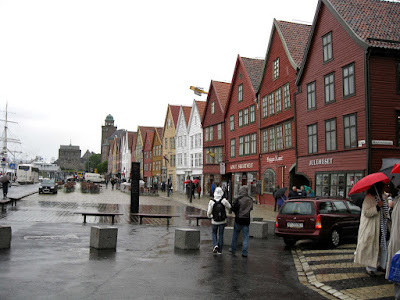 Old Bergen still exists, although mainly for tourists now. The warehouses and trading buildings still stand, each with a narrow frontage and stretching far back. 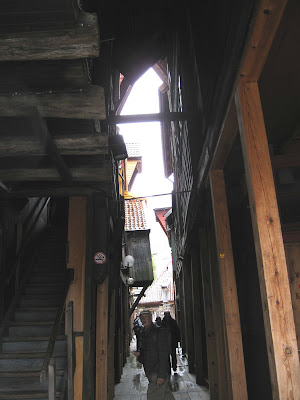 Between the buildings are narrow alley ways (you could hardly call them streets, although they did have names!) which led to further little shops and squares. 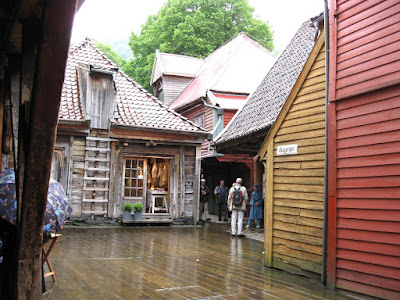 We found these little shops far more interesting than the "posh" tourist shops along the harbour. There was also a much-needed cafe, which sold coffee and delicious cake!

There was a lot of walking for me around Bergen, but I managed it without complaint! A shuttle bus (of which more anon) took us back to the ship.

Next blog, when I have a bit more time, I will show you pics of the ship, and more pics of some of the wonderful places we went to.

My new header is a view of the mountains I saw early in the morning as we sailed up the peninsular of Svarlbad (Spitzbergen) towards Longyearbyen, our next port. The mountains were spectacular, incredibly beautiful, and I fell in love with the Arctic!
Posted by Gilly at 10:48

So glad you had a great time. I've always fancied to go to Scandinavia, it sounds wonderful.

It looks so charming and picturesque! Welcome back - I look forward to more.

I'm so glad you're back; I've been eager to hear that this year's cruise was a better experience than last year's. I look forward to seeing and reading all about it. At least you got off the boat in port this time, right?

Love your header photo. If I ever went on a cruise, I would want it to be to Norway. Looking forward to more pics.

Good to have you back, too!

Fantastic. I am SO jealous. Norway's one of the places I've never seen before.

You left a question in a comment on my blog, but I thought I'd answer it here. You asked how I got the text on my photos; I go to picnik.com for that. It's a good place to play with photos and it's free.

Oh my gosh...great photos and what a marvelous time you must have had through it all! great TP!