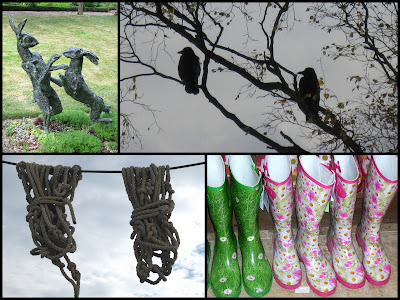 So I made a collage of my favourite "Doubles" Photographs. The crows sit above our garden, in the hope they spot something to eat - they are partial to unwary fledglings in the late spring, but we try to chase them away then.

The boots were at a garden centre - who wants boring green wellies!?

The two hares were a ?bronze statue at a beautiful garden I went to on my visit to Surrey. Chinthurst Lodge was open specially that day, on behalf of charity, and it was quite spectacular. Such a lot of work had gone into it, I was overcome with admiration.

The two hanks of ropes were hanging above the Lifeboats on the Cruise Ship we went on last year. Luckily we didn't have to use the lifeboats (and presumably the rope too) though as we had storm force 9 winds, we did begin to wonder!
Posted by Gilly at 09:25

I love the hares. My son lives in the country up in scotland and has recently told me how the hares are up and about, this must mean spring is here....
Briony
x

Ahhh, what a fun post...now I'll be looking at doubles today when I go out and about!
Have a blessed day!

What an interesting perspective! I'll be looking for doubles today, too.

Yesterday, I saw two buzzards sitting on a lamp post along the road. Think that might have been an omen?? :)

Great choices! I love the statues. The crows look a little scary.

the hares was interesting but the boots were the thing that caught my eye...mebbee the color is the thing...

Great set of pictures. The statues are awesome, but the hanging ropes are incredibly creative.

I'll send you some more crows ifyou will send me the hares.

ropes are my favourite~ i was wondering what on earth they were doing there........

So by fledglings, do you mean baby birds? Is that what the crows are looking for?

Nice pictures as usual. But aren't I seeing triple boots?

Very interesting pictures. I think I like the ropes best - they are different and creative.